The Economics of Narcissism 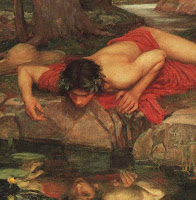 "Because you're worth it". You'll no doubt recognise the advertising slogan.

But my inner economist inevitably asks: 'worth how much exactly'? And what about men? Economists, never shy of quantifying the unquantifiable, have given us an answer: 6%. (And that's just for the men folk).

A recent study has found that men who spend an extra 10 minutes a day grooming - shaving, showering, brushing their hair - get 6% higher weekly wages, all other things being equal (a standard economist caveat). The study is reported in Chris Dillow's blog alongside references to other studies on the 'economics of narcissism'.

Nor are the 'economic' benefits of appearances confined to grooming. New research cited in Psychology Today shows that when competing in amateur sport, dressing like a 'professional' can psyche out your shabbily dressed competitors. Further evidence that appearances count.

So here we have a solution to the problem facing all marketers in the cosmetics industry: how to get men to spend more on their personal care? The answer it would seem is simple: if that new aftershave costs less than 6% of your weekly wages then go ahead, "it's worth it".