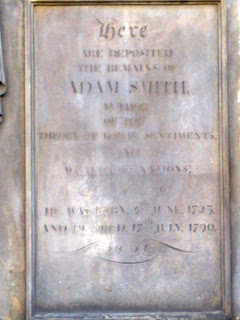 I was in Edinburgh for the weekend, and naturally I had to pay homage to the grave of the greatest economist of all time: Adam Smith. (Admittedly it seemed 'natural' to me - whereas my other half was humouring me I suspect ...).

Smith's most famous insight - 'the division of labour is limited by the extent of the market ' - is the cornerstone of the wealth and economic growth that we now take for granted in free, capitalist societies. Yet before Smith, most observers were of the opinion that craftmanship was the optimum form of labour, i.e.: one person acquiring and performing all the necessary skills to produce clocks, shoes, guns, boats and much else besides.
Smith's genius was to observe (in his case that of match manufacturing) that the optimum form was to divide up the production task so that those with better skills in one task could specialise in just doing that. Out of that came the leaps in productivity and capital accumulation that (a few historical events later) lead to our modern, specialised societies.
But there is a limit to specialisation, i.e.: 'the extent of the market' as Smith observed. I have acquired some of the skills to produce this blog, for example, but twenty or even ten years ago they would have been totally redundant because there was no 'market' then (in terms of large numbers of people with computers and internet access). But Adam Smith (and Google and eircom and Dell and the ESB) have created a sufficient space in which people like me can specialise (as well as doing the day job, ahem!).
Smith currently adorns the back of the Bank of England £20 note: and should the UK ever join the euro (though I'm not holding my breath) then I do hope there'll still be a place somewhere for him.
Posted by Gerard O'Neill at Monday, October 22, 2007