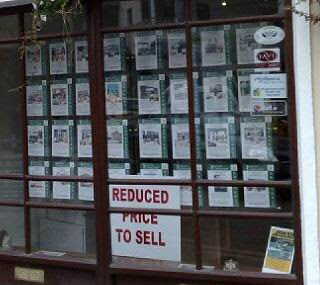 I got this from a loyal TA reader (thanks Jimmy!) – proof, if proof was necessary, that the laws of economics have finally caught up with the estate agents, construction companies and house sellers of Ireland.

I have noticed a growing number of estate agent signs mentioning price reductions. Though the headline figures suggest only modest house price reductions in Ireland (-1.9% year-on-year in August according to the ESRI), news from the United States shows how things might develop if ‘reduced to sell’ catches on.

On a related matter – the Consumer Confidence Index for Ireland took a dive over the past month (see panel opposite): from -5 in September to -12 in October. Published by the European Commission, the key findings are that consumers are worried about the general state of the economy, and particularly about unemployment. Though their concerns have not translated into any immediate behavioural changes (savings intentions and general purchase intentions remain broadly unchanged), bigger ticket purchases such as houses and cars look set to be (even more) adversely affected than they have been recently.

For example, the index of ‘Intentions to Buy a Car’ for Q4 2007 is close to its all time low reached in Q3 1993. So car dealers take note and remember your basic economics: ‘reduced to sell’ works.
Posted by Gerard O'Neill at Wednesday, October 31, 2007