The Abuse of Alcohol Statistics 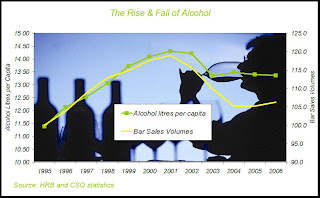 Today saw the publication of a new report from the Health Research Board on alcohol abuse and its ill effects in Ireland.

The report prompted an editorial in The Irish Times demanding that the issues arising from alcohol abuse:

... must be tackled head on if policy is to be successful. Increases in taxation and excise duty are shown to have cut consumption levels of spirits and cider substantially in 2001 and 2003. Regulating the physical availability of alcohol has a similar effect here and internationally. So do drink-driving counter-measures. Informed briefings and targeted counselling of patients have proved particularly effective in hospitals.

So there's the answer: taxation, regulation, policing, re-education. A heavy mixture of measures designed to restrict people's freedom, for their own good of course. But before we go there (abandoning more rights and freedoms along the way), let's just ask what the issue is? The issue, according to the HRB report, is that we have an unhealthy pattern of alcohol consumption in Ireland, one that appears to have worsened in recent years, and that in turn is imposing massive costs on society, the economy, families and individuals.

But strangely, the HRB report makes no reference to this, nor does it seek to explain the decline. I would have thought that before we unleash the policy hounds of 'taxation, regulation, policing, and re-education' we might at least pause to consider whether the problem is already correcting itself, requiring a more proportionate policy response?

The turning point is illustrated in the chart above - I have plotted the HRB's own data against the CSO's data on the sales volumes of pubs, and sure enough they show broadly the same pattern of a peak at the start of the decade, and a return to lower levels in recent times (with the decline in pub volumes continuing through to September 2007 according to other CSO stats). You might then ask 'why is that?' - but the HRB report doesn't tell you. So I'll have a go instead; and two, complementary explanations seems plausible: economics and demographics.

In relation to economics, the straightforward explanation for the decline in alcohol consumption per capita and bar sales volumes in particular is that consumers got sick of being fleeced by publicans back in 2001 (which coincided with the introduction of euro currency). So they voted with their wallets and purses and went to the off licence instead. Indeed, there is a very strong (negative) correlation between the trend in bar sales volumes on the one hand, and that of the relative price of alcohol in pubs to that in off licences on the other.

The demographic explanation is even more straightforward: the share of 15-24 year olds in the total adult population (15+) fell to less than 20% in 2005/2006 bringing their share to a level lower than at any time since 1950. And as any criminologist, actuary and A&E consultant will tell you: older teenagers and younger adults are the main cause of crimes, premature deaths, and abuse of various substances. So as their share of the total population declines, so the incidence of various risk-taking activities will also decline.

But you won't read any of this in the HRB report. Indeed, Ireland is not alone in the growing problem of alcohol statistics abuse (and the moral panic and middle class guilt that normally ensues). For an amusing, surgical analysis of yet another over-hyped commentary on alcohol trends listen to Tim Harford's excellent programme More or Less on BBC Radio 4 to see how our cousins in the UK like to abuse alcohol statistics as well.

At the end of the day, we need to keep the problem of alcohol abuse in perspective. Abuse exists and it is a tragedy for all involved. But it remains (fortunately for the rest of us) very much a minority problem. Yes we need to behave sensibly and responsibly in relation to alcohol consumption: it is a powerful, mood-altering, behaviour affecting chemical substance after all. I for one, however, want an alcohol policy for grown ups in Ireland: one that allows me to exercise my choices and freedom as an adult, whilst informing me of the consequences of my behaviour so that I can weigh up the risks. Harford points to the example of new Australian guidelines on alcohol consumption, where they do seem to have adopted alcohol policies for grown ups.

By all means let’s tackle the problems of alcohol abuse that exist – but let’s not impose a new set of restrictions and restraints in response to a view of those problems that is increasingly out of date.
Posted by Gerard O'Neill at Thursday, November 01, 2007