Banks caught in a Prisoner's Dilemma 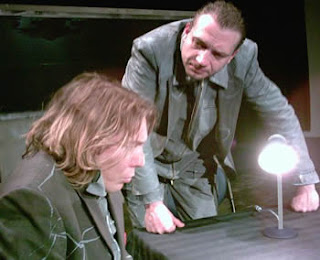 The case of solicitor Michael Lynn, whose practice has been shut down by the Law Society, is a powerful example of what economists call 'The Prisoner's Dilemma'. The 'prisoners' in this case are the banks that have loaned money to Mr. Lynn.

The Prisoner's Dilemma - or PD for short - goes like this (in the classical illustration from game theory):

Two suspects, A and B, are arrested by the police. The police have insufficient evidence for a conviction, and, having separated both prisoners, visit each of them to offer the same deal: if one testifies for the prosecution against the other and the other remains silent, the betrayer goes free and the silent accomplice receives the full 10-year sentence. If both stay silent, both prisoners are sentenced to only six months in jail for a minor charge. If each betrays the other, each receives a five-year sentence. Each prisoner must make the choice of whether to betray the other or to remain silent. However, neither prisoner knows for sure what choice the other prisoner will make. So this dilemma poses the question: How should the prisoners act?

You might just be wondering what this has to do with the banks in the Lynn debacle? Well, consider this from a recent RTÉ story on the case:

The financial institutions are now involved in what was described as a 'competition' to register the properties offered to them as security for loans they issued. Lawyers for Bank of Scotland Ireland asked Mr Justice Johnson to change his order to allow Mr Lynn to comply with the undertakings he gave to them. IIB Homeloans asked the High Court for permission to bring the same issue before the Commercial Court.

The two banks want Mr Lynn to sign the necessary documents to allow them to register mortgages on the properties he offered them as security. But many of the other financial institutions objected to this.

Lawyers for Irish Nationwide said this could allow banks to 'jump the queue' in terms of trying to get their money back. Many of the properties, the court was told, would be subject to competing claims from several financial institutions.

So there you have it: if one bank ('Prisoner A' in the PD example) 'jumps the queue' then the other banks have to do the same (playing the part of 'Prisoner B'). The result: they are probably all worse off than if they had 'co-operated' by doing the equivalent of 'remaining silent'.

This is another illustration of the power of neuroeconomics to guide our understanding of trends in business and marketing. By the way, you can put yourself in the interrogation room and play the Prisoner's Dilemma game for yourself here.

So what next? I expect to see the Prisoner's Dilemma played out on an even bigger scale with some of Ireland's largest property developers and financial institutions. If you are a non-Irish bank involved in small, syndicated loans to Irish developers who are struggling with their interest repayments, then why not pull the plug now and get the bad news out of the way; after all, other financial institutions globally are announcing major write downs of bad debts on a daily basis? Irish banks, on the other hand, might hesitate to pull the plug given the battering their share prices have already taken - but that's Prisoner B's problem, right?

There is though a small consolation for any financial institution caught in the Prisoner's Dilemma: pure economic theory predicts that each prisoner will always 'rat' on the other prisoner, 100% of the time - leaving them both worse off than if they had remained silent. But experimental economics shows that people caught in the prisoner's dilemma actually co-operate (stay silent) 40% of the time. The other 60% of the time one or both parties end up much worse off. I did say it was a small consolation.
Posted by Gerard O'Neill at Sunday, November 11, 2007