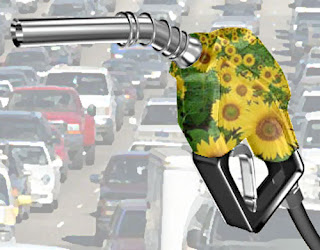 This week's CPI report shows that Irish consumers are now experiencing a food price spike. The detailed sub-indices report for November from the CSO shows basic food prices rising by three or more times the general inflation rate (currently at 5.0%).

Some of the price rises are quite shocking:

What's going on? Though energy prices have been grabbing the headlines, it's food that seems to be undergoing the most far-reaching changes, with long-term consequences for Irish consumers. After all, there's always an alternative to transport - it's called walking. The alternative to eating isn't really an alternative.

According to the WorldWatch Institute, there is a fundamental shift taking place in the world's capacity for food production, and it isn't for the better. As their analysis points out, despite record grain harvests this year, prices for corn, rice and wheat etc have been driven higher by rocketing demand and falling cereal stocks. Here are just some of the trends that they have observed:

At harvest time, the U.S. corn export price was up about 70 percent from the previous year, while the American hard wheat price averaged 65 percent more than a year earlier. Wheat prices in Argentina, another major exporter, doubled since 2006. Important wheat exporters like Ukraine and Russia have imposed export restrictions to ensure a sufficient domestic supply. Major importers, like Egypt, the European Union, Yemen, and Iraq, have reacted to high prices by purchasing grain early, which has further tightened supplies and boosted prices.

And to make matters worse, a growing share of global grain output is now being directed towards ethanol production for use in biofuels:

People consume a little less than half (48 percent) of the world’s grain directly—as steamed rice, bread, tortillas, or millet cakes, for instance. Roughly one third (35 percent) becomes livestock feed. And a growing share, 17 percent, is used to make ethanol and other fuels.

More and more governments in the West (particularly the USA and EU) are championing biofuels as a way of improving our energy security. The chances of this happening are, to say the least, fraught with risk. A more cynical view is that the rush to biofuels is more about finding an alternative to traditional farm subsidies now being phased out; and that it risks doing more harm than good to the environment (as rain forests are cut down to make room for biofuel crops). Unintended consequences indeed.

The reality for Irish consumers is that the food price shock - like the oil price shock - has been mitigated somewhat by the decline of the dollar. Hence inflation in supermarkets measured by the CSO's retail sales index remains in low single digits. For now.

But beware politicians promising security: hold on to your wallet or purse because the price you pay may well be more than you can afford.
Posted by Gerard O'Neill at Friday, December 14, 2007