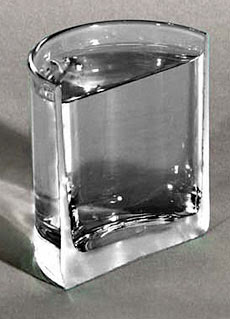 Samuel Britton, an economic journalist I have long admired, observes in a recent FT article that:

Friedrich Hayek once said that he knew few people who had made money from acting on economic forecasts, but a good many who had made it from selling them.

The latest Quarterly Economic Commentary from the ESRI is certainly one of the more difficult ones to act on, if you feel so inclined. It looks like the economic glass in 2008 will be 'half full' or 'half empty' - depending on your point of view.

The publication this week of the latest Eurobarometer survey shows the Irish to be relatively optimistic about 2008. Only 7% expect 'your life in general' to be worse over the next 12 months, while 36% expect life to be better. However, 34% expect the 'economic situation in Ireland' to be worse next year, and only 18% expect it to be better. It is the usual story of 'private comfort and public concern' that I've written about before in relation to consumer confidence. That said, even though the top two concerns for European citizens are unemployment and inflation respectively, for Irish citizens their top two concerns at present are crime (at 57% of all adults) and healthcare (45%) - among the highest ratings of all EU27 countries.

It might be more accurate therefore to say that Irish consumers are 'less optimistic' about the outlook for the economy rather than unduly pessimistic. So I am inclined for once to take the 'half full' view of prospects for next year, especially in relation to consumer spending. The ESRI forecasts a 3.8% growth rate for real consumer spending - about half this year's rate, but still respectable in an EU context. Add to that consumer price inflation of 2.5% and you get a total consumer spend of €97.1 billion, or €5.8 billion more than this year.

That's a lot of extra consumer spending whichever way you look at it.
Posted by Gerard O'Neill at Friday, December 21, 2007