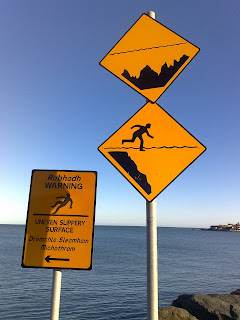 Another lap around the Sun and we're all wondering what comes next. For me there are reasons to be cheerful and reasons to be fearful going into 2008. So here goes:

Reasons To Be Cheerful

Living in Ireland: ours is a peaceful, prosperous and free country - relatively speaking - and as such we are better able than the greater part of humanity to successfully weather most economic storms.

Youthful Energies: we still have one of the youngest populations in Europe, recently augmented by immigration, with the result that our culture is still shaped by the virtues of ambition and future-orientation; definitely more New Europe than Old Europe.

Good Governance: okay, stop laughing, let's just say 'not such a bad sort of governance'; though we may have too many politicians, being busy bodies, we are blessed with a political system that usually doesn't go to extremes - providing some degree of predictability for those of us creating the wealth and the jobs (and paying the taxes that the politicians then spend for the, er, greater good).

Making Poverty History: fortunately not all the good news is confined to our own little island, as we observe the powers of personal and market freedom to raise millions out of poverty in Africa and other parts of the world; supported - where appropriate - by innovative aid initiatives.

Reasons To Be Fearful

Energy Shocked: this is still the Big One for me, and while we can ride out financial turbulence we can't outrun the laws of thermodynamics; so my expectation is that we will see the price of oil break through the psychological $100 per barrel barrier in 2008 - one more milestone on the road to a nuclear-powered future for Ireland (whether we generate our own or import nuclear electricity from the UK), with or without alternative sources as well.

Weak Foundations: Ireland's housing market is like its stock market, it tends to overshoot in both directions (over-valuation in the boom times, under-valuation in the doom times); and the trajectory will definitely be toward the under-valuation side in 2008 (and possibly over the rest of the decade) - but having off-shored our monetary policy to the European Central Bank there is little we can do but hope for a more benign interest rate environment in the months ahead.

American Nightmare: again lifting the gaze from our own, relatively fortunate island, one of the biggest uncertainties facing a trade-dependent nation like Ireland is the outlook for the US economy; not least because the US is in the frontline of a wrenching adjustment to the sub-prime crisis that may yet take the world's economy down with it.

Ethnic Tensions: maybe we Irish really are lucky, for the experience of mass immigration in recent years has been accompanied by remarkably little social strain or strife compared with the experience of many other countries including the UK, at least for now; but a failure to progress the integration and naturalisation of those immigrants who want it will risk much, if not all that has been gained from immigration - especially if we experience a sharper economic slowdown than projected.

It seems to me that the 'balance' of cheerful and fearful thoughts on the year ahead nets out in favour of the optimists for once (and perhaps surprisingly so, given the generally gloomy outlook of most Irish commentators). But I am only thinking of us folk in Ireland - I'd be firmly in the camp of the most despondent pessimists if I happened to live in Pakistan or Zimbabwe or Afghanistan. So let's count our blessings going into 2008 - and show some consideration to those much less fortunate than ourselves as we begin another lap around the Sun.

As a lifelong Economist reader, I strongly recommend their guide to The World in 2008 for those of you looking for a somewhat less parochial perspective than my contribution above.
Posted by Gerard O'Neill at Saturday, December 29, 2007