Is Jesus a Catholic? 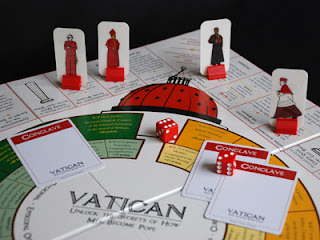 Some commentators suggest that the recent influx of Polish immigrants to the UK has boosted the apparent 'strength' of the Catholic Church there. Similarly, there is anecdotal evidence of a 'Catholic renaissance' here in Ireland - as Polish priests are flown in to tend to their flock in their native tongue. The success of the Vatican Board Game (I kid you not!) may be further testimony to a new resurgence in the Catholic Church. A last minute Christmas stocking filler perhaps ...?

But more interesting is the fact that a former Prime Minister should make such a public, even 'belated' decision about his religious beliefs. It is this rather than his choice of Catholicism per se which has warranted such widespread commentary. I have just finished reading Jennifer Michael Hecht's delightful book Doubt: A History, and Blair's decision in some ways bears out her analysis of the place of religious doubt in contemporary Western societies. Hecht rightly criticises the current, extremely polarised debate between religion and atheism as personified in the latter case by Richard Dawkins, whose book The God Delusion has so far sold over 1.5 million copies. She makes the point in her review of the history of doubt since the writings of ancient Greek philosophers that there are many shades of grey between the black and white extremes of fundamentalist theism and fundamentalist atheism. The value of doubt in Western thought has been to avoid (though not always successfully) the extremes of absolute conviction that have historically provided an eight lane highway to hell (on Earth) for believers and doubters alike.

You can listen to an engaging interview with Hecht over at America Public Media's Speaking of Faith website, and while you are there take the Scale of Doubt quiz to see where you are on the theism-atheism spectrum. You might be surprised.

Finally, I rarely read let alone recommend Papal Encyclicals, but those of you interested in the current debate about faith and doubt in the West might check out the pope's latest writings on reason, faith and hope in his encyclical Spe Salvi. Pope Benedict XVI is comfortable quoting secular writers as well as traditional Christian teachings in relation to the challenges facing comtemporary, secular societies - while at the same time delineating a place for reason as well as faith in the 21st century.

It certainly stands head and shoulders above the Ned Flanders level of 'religion lite' exemplified by some Christian writers such as Rick Warren; deconstructed in an entertaining and enlightening way by Bob Price in his reply to Warren called The Reason Driven Life.

So as a 'sympathetic doubter' I hope that Western Civilisation continues to benefit from the creative tensions between faith, reason and doubt that have made us what we are today.
Posted by Gerard O'Neill at Sunday, December 23, 2007