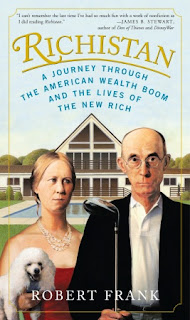 The latest issue of Prospect magazine features a cover story on 'The Lucre of the Irish'. The story is essentially about a new generation of wealthy property developers and their high profile, high spending lifestyles. It's an entertaining one at that.

Ireland, like America, has experienced an unprecedented wealth boom in the past decade, driven mostly by land and property values. This new 'Richistan' - or 'Tir na Saibhir' to give it a more local flavour - is populated by first generation millionaires and billionaires with no previous history of serious wealth.

We had further confirmation of our new found status in statistics released by Eurostat earlier this week. These show that GDP per capita in Ireland is now nearly 50% above the EU average - second only to Luxembourg among the EU27 nations.

As we move from being the Nouveau Riche of Europe to joining the ranks of Old Money, what kind of people will we become? Michael D. Higgins TD observes about the wealthy Irish in the Prospect story that:

There is a gangster charm about some of the property people. But what I regret is they haven't the imagination to fund an orchestra, or a piece of public sculpture.

Does an embarrassment of riches lead to a poverty of imagination? Perhaps - though it may be too early to tell. Still, I can't help noticing that in the United States, many of the most generous contributors to philanthropy are founders of hedge funds (reported in the latest issue of Portfolio) - and are therefore very much in the same 'nouveau riche' category as many of Ireland's wealthy. But I don't see quite the same level of philanthropic endeavour among our own wealthy.

That said, we don't have the same culture of philanthropic effort in Ireland as in America, partly because we have a more developed social welfare system; and partly because we don't have the same peer effect to 'raise the consciousness' of wealthy Irish. That may not matter for now, after all you need to create the wealth before you can do the philanthropy. And I suspect most wealthy Irish are still focused on keeping and growing the 'success' they have enjoyed to worry for now about 'significance'.

I do expect though that we will see more imaginative examples of Irish philanthropy in the years and decades ahead - including Michael D's orchestras and public sculptures.
Posted by Gerard O'Neill at Saturday, December 22, 2007