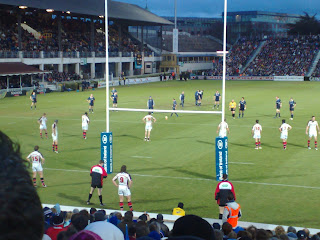 I got to spend St Stephen's Day with 18,000+ others watching Felipe Contepomi clock up the points in a 29-0 victory over Ulster. It was definitely a game of two halves - the first half it seemed everyone, players and supporters, were still suffering the after effects of too much Christmas turkey. The second half was much more entertaining, especially for those of us in the North Stand (from where I took this photo) as we got to see Leinster's excellent tries close up.

It was also a great 'herd' experience - as written about by the always interesting Mark Earls. Still, I did feel a pang of sorrow for my fellow Ulstermen (though I guess I'm more of a Leinster fan these days), but some of the comments from the stands on their performance were very amusing. Not of course that any of us would say it to their face! Which reminds me of the joke over at The Adam Smith Institute blog:

A guy in a bar leant over to the guy next to him and said, "Wanna hear a blonde joke?"

The first guy said, "Nah, not if I'm gonna have to explain it three times."