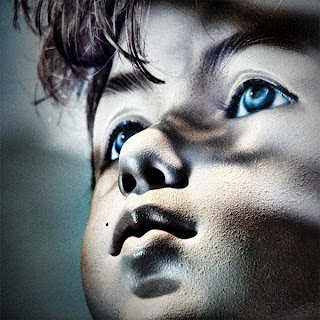 It seems that 'old blue eyes' are actually quite young. According to Scientific American, nobody had blue eyes 10,000 years ago - even though humans have been around in our present form for nearly 200,000 years.

It seems that the pace of evolution is speeding up - by ten to one hundred times the average long term rate. Indeed, the authors of the research reviewed in Scientific American suggest that we are now more different genetically from our ancestors 4,000 years ago than they were from Neanderthals. That's a lot of difference.

What's driving the change? The answer is: we are. Culture and the opportunities created by the development of first agricultural and then urban societies create a unique environment in which random genetic mutations (such as blue eyes) can spread more rapidly within the human population than they could have in the past.

There is a (genuinely) entertaining discussion about genetic mutation in the latest edition of In Our Time on BBC Radio 4 (easily the most intelligent radio programme on the planet, in my totally unbiased opinion of course). The programme informs us that genetic mutations take place in each of us literally thousands if not millions of times every day. Most are repaired by our body's defence systems, and of those that aren't many are benign but unfortunately some are malignant (think cancer). However, every once in a while a genetic change takes place that provides some genetic advantage and is quickly spread to the next generation and throughout the population.

The programme also tells us that men are more susceptible to genetic mutation than women (the former produce sperm all the time with the genetic risks that go with the process, whereas women are born with all the eggs they will ever produce already in place in their ovaries). Like I said, a really interesting programme of the 'I-didn't-know-that' variety.

So what does genetic acceleration mean for the future. Here's one commentator on that very question:

Finally, now that we are addressing culture, it might be important to consider the possibility that recent acceleration of human adaptive evolution may not apply simply to genetic processes! It may be that a Lunar Society can only exist in a population of a certain size where a critical mass of oddballs are in communication. It may be that men of singular and incomprehensible intellect such as Isaac Newton are only imaginable in the sample space of possibilities when our base population has increased enough so that impossible genius crosses the threshold to improbable genius. This summer I had lunch with some economists and they kept talking about the idea that as human population increases the number of innovations would increase and so the frontier of the rate economic growth would naturally expand outward in value. Ultimately Nature is One, and insights and logic which bear fruit in one branch of science may be more relevant than we thought across the whole arc of creation.

What this says to me is that if the next Newton or Darwin or Einstein is going to be born in Africa or Asia or Latin America then he (and it will most likely be a 'he' for the reason referred to above) will only get to share his gifts of genius with the world if he grows up in an environment that provides him with the nutrition, security and education necessary to become a healthy, mature adult. Yet another reason why ridding the world of the scourge of extreme poverty should be the number one priority for all of us.
Posted by Gerard O'Neill at Tuesday, December 11, 2007