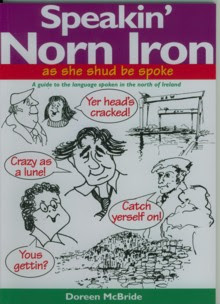 I was interviewed by Mark Carruthers on BBC Radio Ulster yesterday about the economic outlook for the Northern and Southern economies. The context was an article in yesterday's Irish Times about the gathering sense of economic 'doom and gloom' there (as here in the South).

Naturally (if you've just read my previous post) I was not on the side of the 'gloomsters' on this one. I pointed out that recent forecasts are projecting a growth rate for Northern Ireland that is higher than the UK average, and only just below that for the Republic of Ireland. In fact, Northern Ireland currently has a lower unemployment rate (3.6%) than the South (and one of the lowest of any region in the EU) - a far cry from the situation prevailing in previous decades.

So what is it with this constant need on the part of so many commentators to see the cloud even when the silver lining is bigger? There's an excellent analysis of this very topic in the current issue of the New Statesman called: 'Why Life is Good'. To quote the author, Matthew Taylor:

That people whose beliefs imply optimism seem to spend most of their time wallowing in pessimism is one reason that leftists sometimes lack personal credibility ... But miserable idealists need to make a New Year resolution to look on the bright side. Pessimism is becoming an impediment to progressive politics. It is 50 years since J K Galbraith coined the phrase "private affluence and public squalor"; today, the dichotomy is between private hubris and public pessimism.

It's a thoughtful piece - and he adds further that:

Self-actualisation is the peak of Maslow's hierarchy of needs. There is evidence that more of us are trying to climb that hierarchy. It is in the crowds at book festivals and art galleries, in ever more demanding consumerism with an emphasis on the personal, sensual and adventurous. We want to enjoy ourselves, to be appreciated and to feel we are growing from the experience. Compare that to the last Labour Party, trade union or council meeting you went to.

The gloomsters have it wrong: consumerism and affluence delivers not because it gives us lots of stuff we don't need, but simply because it gives us precisely the things that we want. Sure the economy will slow this year - but a lower speed still means momentum, at whatever the pace.

So my message to the doomsters and gloomsters, North and South, is: catch yourselves on.
Posted by Gerard O'Neill at Wednesday, January 09, 2008