Every Parent's (Other) Nightmare 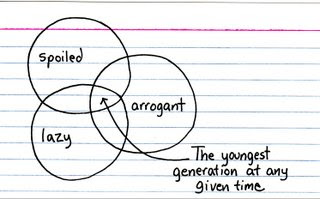 It's your first break away as a couple without the kids in months, if not years. They're old enough now to look after themselves, you hope. Then you get the call, it's the police, and it's about your children ...

Or, if you have the misfortune to be Corey Delaney's parents, its about the 500 strong party currently demolishing your home and your neighbourhood despite the best efforts of riot police, dog handlers, and helicopters to stop them. Fighting for their right to party indeed. Needless to say, Corey has become a poster child for a generation seen as self absorbed, hedonistic, and amoral. Or just plain 'teenagers' if you prefer.

But (as the parent of two teenagers) I'm inclined to give Corey's generation the benefit of the doubt (though I'm not sure how I'd feel if I was Corey's parents). The image above is from the delightful Indexed blog by Jessica Hagy. Through her drawings she provides a commentary on the world around us, and this one certainly captures the moral panic provoked by Corey's 'free gaff' experiment.

A new report from the Social Issues Research Centre paints a somewhat more encouraging picture of the Trust Fund Generation. Though it is UK focused, some of the studies findings are relevant to Ireland. The SIRC study concludes:

We have chosen in this report to take a cautiously optimistic view of children and young people, disregarding much of the negative complaining about ‘the youth of today’ that passes for social commentary and analysis in the popular media and even in the outputs of some think tanks. This is a generation that is growing up in a far less ‘gentle’ age than was experienced by their parents, and certainly much less ‘fun’ than that of their grandparents.

These very ‘sensible’ but also very individualistic and experimenting young people have established, and will themselves drive, a lifestyle model that will impact on the Trust Fund generation in very significant ways. One thing we can be certain of is that today’s babies and toddlers, like their older teenage contemporaries, will have a very different outlook on life in fifteen to eighteen years from that of their parents as a result.

In other words, the younger generation will grow up and figure things out for themselves, because they'll have to. Just like us older folk did before them.
Posted by Gerard O'Neill at Sunday, January 20, 2008