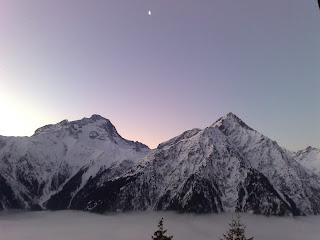 I'm in the French Alps this week on a family holiday learning to ski (or attending ski school to be more precise, I'm not sure about the 'learning' bit!) I took this photo from my hotel room balcony yesterday morning, with my trusty N95. The scenery really is spectacular.

One interesting thing, paradoxically, is how many French people are here ... working in the hotels, cafes, restaurants and pubs. The experience is very different to that back home in Ireland, where (as one American tourist I met here lamented) you could stay in hotels the length and breadth of Ireland and not actually meet any Irish people (meeting Polish, Chinese and other nationalities instead, including French of course!)

Which got me wondering about the decision of countries like France not to let new Eastern European members of the EU enter their workforce after 2005, unlike Ireland (and the UK and Sweden) which opened its doors to all who wished to work (from the first wave of members anyway).

On the one hand it means that you do actually get to meet lots of French people when you holiday in France (and English waiters as well as it happens, working to fund their skiing lifestyle). On the other - and I never thought I'd say this - the service in France isn't as good as you'd get in many comparable places in Ireland in my experience: they just don't seem to have that many staff (often with one waiter looking after 10-15 tables at peak times). I have found myself occasionally wishing for an efficient Polish waiter to take my order rather than leave us waiting.

So French standards of service might have benefited from an influx of (relatively inexpensive) staff from Eastern Europe, even if the service experience might not have been the same for us tourists.

All that said, the quality of food in France remains, as ever, 'superbe'.
Posted by Gerard O'Neill at Thursday, January 03, 2008