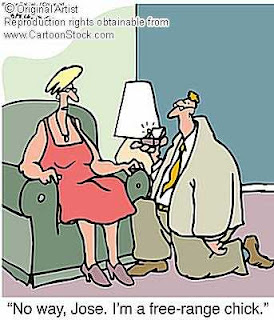 One of the most interesting research studies I was involved in last year was about the first seven years of marriage. The study showed that marriage in Ireland seems to be in robust good shape as an institution - and, more importantly, as a lived experience for the couples involved.

Recent CSO data on the number of marriages and the marriage rate up to Q1 2007 confirms that marriage appears, if anything, to be increasingly popular in Ireland. But what about the future? There's a fascinating debate over at Cato Unbound including an article by Stephanie Coontz on The Future of Marriage. Coontz takes the reader through the history of marriage up to its present day manifestation as a 'partnership of equals' - something it most definitely hasn't been in the past. She is in turn quite optimistic about the future of marriage because of its remarkable capacity to adjust to societal and cultural change, referencing two key lessons from history:

First, marriage is not on the verge of extinction. Most cohabiting couples eventually do get married, either to each other or to someone else. ... The second lesson of history is that the time has passed when we can construct our social policies, work schedules, health insurance systems, sex education programs — or even our moral and ethical beliefs about who owes what to whom — on the assumption that all long-term commitments and care-giving obligations should or can be organized through marriage. Of course we must seek ways to make marriage more possible for couples and to strengthen the marriages they contract.

But what about adjusting to economic change? Tim Harford, the Undercover Economist, has written two excellent articles on behavioural economics and marriage in Slate (part 1 on The Economics of Marriage, and part 2 on Divorce is Good for Women). Like Coontz, he charts a remarkable change in marriage from the perspectives of men and women alike, examining the role of female employment, contraception and education on couples' expectations of marriage.

So marriage is changing in Ireland (as elsewhere), but the one constant is its continuing popularity as a desired state for most young singles. But not everything is changing, as noted in the ESRI report Work Rich, Time Poor? Time Use of Women and Men in Ireland. Irish married men it seems do less than an equal share of the housework, including childcare (but rather more of the paid work).

Though quite why they needed to do a survey to find this out is not explained ...
Posted by Gerard O'Neill at Wednesday, January 23, 2008