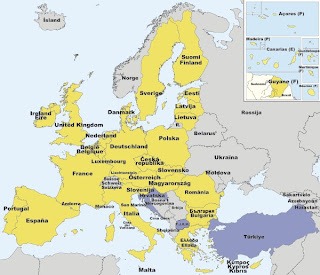 I remember the excitement at the time the Single Market was launched in 1993, and how it seemed to herald the final emergence of a Europe that benefited all its people. We were promised cheap mortgages from French banks, cheaper cars straight from the assembly line in Germany, and much, much cheaper wine to toast our political masters for delivering a Europe for the consumer.

That was fifteen years ago - and a lot has happened since: but then again, a lot has not happened. A new report from Forfás reviewing the Single Market shows how it has failed to deliver many of the benefits promised by its progenitors: at least from an Irish viewpoint. We have some of the highest comparative prices in Europe a decade and a half after the Single Market came into effect. Some of these price gaps, of course, are due to the decisions of our own politicians not to pass on the 'price savings' of a single market, and instead to impose new taxes. Think Vehicle Registration Tax, for example.

So is the Single Market a failed experiment? It would be tragic indeed if it was. The Single Market personified, for me anyway, the European Ideal at work - the free movement of people, capital, goods and services to the benefit of our collective standard of living. But Europe's politicians (like all politicians) suffer from an addiction to managerialism which compels them to constantly tweak and change and modify what is best left alone - indulging grand fantasies, for example, about a Europe that is the equal (or better) of the United States.

Worse, some politicians even want to reverse the little progress there has been with The Single Market. Hence French President Sarkozy's insistence in the Lisbon Treaty negotiations that a reference to 'free and undistorted competition' as one of the EU's goals be removed from the treaties it updates. Why? Here's his take on competition:

A bizarre statement to be sure: competition is criticized for reducing the turnout in European elections! Perhaps he imagines we're all too busy shopping to vote or something. Still, his is hardly the sentiment of a friend of The Single Market.

So I am not optimistic about the future of The Single Market, limited and all as its success to date has been. But we can at least hope that Europe's businesses will stay one step ahead of the managerialist politicians, much like Ryanair has. Give me one Michael O'Leary to 27 Nicholas Sarkozys any time there's a decision to make affecting the welfare of Europe's consumers.
Posted by Gerard O'Neill at Friday, February 15, 2008