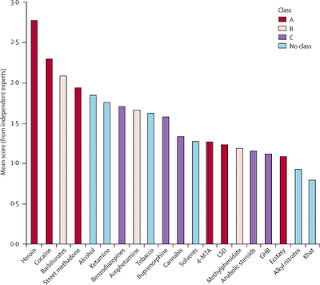 Alcohol, Ecstasy, Cannabis, LSD: which is the most harmful? If you watched the recent BBC Horizon programme on the 20 most dangerous drugs then you'll know that the answer is 'A' for alcohol. Horizon was reporting on a controversial study published in the Lancet late last year.

The fact that so many illegal drugs are less harmful than the legal ones (alcohol and tobacco in the list) is depressing testimony to the stupidity of our laws on drugs. But not only are the present laws stupid, they don't work - as evidenced by the shocking increase in drug related murder and violence on our streets.

The latest crime statistics for Ireland show that:

Of course, this is a worldwide problem - mainly because of the adoption of almost universal prohibition on the same set of drugs as in Ireland. Unfortunately this global picture reflects the dominance of the United States in shaping and operating UN drug control agencies and policies. It is as if the 'prohibition impulse' didn't go away in America but instead got channeled from alcohol into cannabis, LSD, heroin etc. But the sheer cost (financial, political, social and moral) of the current 'War on Drugs' is forcing a rethink in several countries - even in the United States.

Organisations like the UK's Transform Drug Policy Foundation are working "to reduce harm and promote sustainable health and wellbeing by bringing about a just and effective system to regulate and control drugs at local, national and international levels" by "raising the debate on the prohibition, legalisation and regulation of all drugs including heroin, cocaine and cannabis." Their analyses are thoughtful, insightful and realistic - nobody is calling for overnight legalisation and to hell with the consequences.
The good news is that the best weapon we can wield in the war against drug-related crime is actually economics. Jeremy Berkoff has written a brilliant paper on The Opium Economy: A Possible Approach to Reform, in which he proposes an 'incremental approach' moving from prohibition to legalisation that would:

... focus on steadily squeezing - and ideally ultimately eliminating - the profits earned in the illicit trade. It would do this: (i) by diverting trade from illicit traffickers to (licit) public agencies; (ii) by using a form of predatory pricing that squeezed the margin available to illicit traffickers; and (iii) by maintaining - even enhancing - the costs to illicit traffickers through continued active prohibition and interdiction. Over time, as the illicit trade withered, local regulated markets in consuming countries might become feasible, in which case the public operations might - to a limited extent - give way to the private sector. As in the case of tobacco and alcohol, supply in private markets would be regulated and taxed with the general aim of suppressing demand and minimising harm. To achieve these goals, pricing would be complemented by appropriate advisory and educational measures designed to guide and educate potential and actual users.

I am convinced that the plain old price mechanism can do more to rid us of the drug barons - and the whole sub-culture of criminality that they spawn - than any promises of 'more gardai' and 'stiffer sentences'.

One definition of insanity is to 'keep on doing the same thing expecting to get a different result'. Sadly, that is where we are with our drugs policies in Ireland. And plainly the drugs policies don't work. But slowly we are acquiring the confidence for policy innovation in Ireland (rather than 'policy aping') - think of world firsts like the plastic bag tax and the smoking ban. So why not take the global lead with our drugs policies, rather than bequeathing to the next generation a dreadful legacy of further policy failures?

For the sake of our children and our country I really hope we do.
Posted by Gerard O'Neill at Wednesday, February 06, 2008