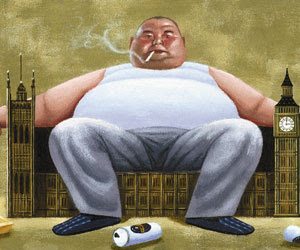 I often feel we Irish are in the habit of adopting all the bad ideas our English cousins invent, and ignoring all their good ones. So I am especially concerned at the 'nanny state' now emerging in the UK: as it may be a precursor to something similar here.

This week's New Statesman has an excellent article on the continuing tension between Paternalism and Liberalism at the heart of British politics. I've written before about the dangers of the nanny state in Ireland, and the New Statesman addresses some of the same concerns. As ever, there are some useful insights from behavioural economics that might be of use in negotiating our way between adopting the wrong policies and ignoring the right policies. Useful for businesses, not just policy makers.

Take this example cited in the article:

A story from the US scholar Robert Cialdini's Influence: Science and Practice - a bible for behaviourists - showed how a restaurant reduced the rate of people failing to turn up for a table booking from 30 to 10 per cent by making an apparently tiny change to the conversation when a table was booked. Staff had always said something like: "Please let us know if you can't come." Now they were asked to say: "You will let us know if you can't come, won't you?" and then - crucially - pause and wait for a response. The answer sealed a kind of contract.

The key word is contract: if anything the history of Western Civilisation has been about the negotiation and re-negotiation of the Social Contract. And that it seems is what we are trying to do now: only negotiating responsiblities not between citizens and the state (as in the past), but between the individual and his or her fellow citizens (e.g.: in relation to issues such as obesity or passive smoking). It took the west several centuries to transition from feudalism to democracy - so we shouldn't expect any immediate resolution to the current tensions at the heart of the 'nanny state' debate.

As a keen coffee drinker I've fretted in the past about the risk of coffee being demonised just like alcohol is at present, so I was delighted to read recently more evidence confirming the beneficial impact of coffee on attention and productivity. We're safe for another while yet - whew!
Posted by Gerard O'Neill at Monday, February 18, 2008