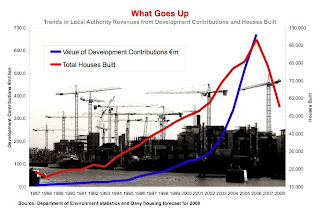 There's a rather gloomy piece in today's Daily Telegraph suggesting that Irish banks are about to go the way of Scandinavian banks in the early 1990s. It wasn't pleasant, in case you were still in nappies back then - think Northern Rock only it's your bank and the crisis lasts nearly ten years.

Nevertheless, I think their analysis is tad overdone - just another installment in the we're-all-doomed journalistic mid-life crisis that we are treated to on a daily basis nowadays. But the Telegraph is right to anticipate unforeseen consequences from our property fueled epidemic of binge borrowing during the past few years. Only I don't think it will be the banks who will hurt (any more than they have already: have you seen their share prices lately?)

Needless to say, our local authorities have gotten used to this kind of revenue. But this year I suspect that contributions are about to take a nose dive, as implied by the forecast for house completions in 2008 in the chart. Worse, a number of them have undoubtedly anticipated a continuous increase in contributions in the years ahead - perhaps even banked on it. Just how important contributions have become is noted in a recent report into the operation of development contributions around Ireland:

This additional revenue has been used to fund a range of key public infrastructure such as roads, sewers etc. that are necessary for all housing and commercial construction to proceed and for purposes of specific community benefit (such as recreational areas, parks etc.) as well as for more general purposes supporting economic growth and competitiveness ... According to the National Development Plan it is estimated that €2.1 billion will be collected in development contributions during the lifetime of the plan (2007-2013).

I don't think they are going to see €2.1 billion - or anything even close to it over the next five years. So then what will they do? Why it's obvious: they will fight tooth and nail to hold on to every cent of revenue they get from every other source. Hence the outrageous decision to effectively ban private suppliers of waste collection services in Dublin. Dublin's local government bureaucrats have an effective monopoly and like all good monopolists they want to hold on to it and to exploit it as best they can. Tony Soprano would be proud of them.

With revenues from development contributions drying up faster than bank credit lines then expect things to get a lot uglier down at your local town hall.
Posted by Gerard O'Neill at Tuesday, March 11, 2008