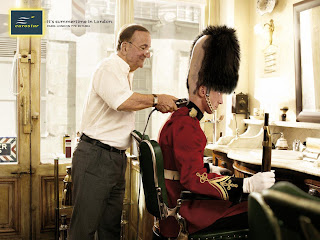 I had an Undercover Economist moment the other day when I went to get a hair cut. The barber I usually go to was closed, so I went to the hairdressers instead - there's a 'walk in, no appointment necessary' one in Blackrock shopping centre.

There on the wall behind the reception counter was a price list plainly stating that gentlemen's hair cuts were cheaper than women's. This struck me as remarkable - why would women put up with such blatant discrimination? I asked the stylist who cut my hair whether it was easier/quicker for her to cut men's hair on average than women's. Yes and no was her answer: older men (like me unfortunately) tend to have straight forward requirements (read: boring/conservative) - but in her experience younger men were increasingly demanding the same 'exotic' range of treatments as many women.

One key difference between men and women of course is that men have an alternative: the barbers. This readily available (except last weekend), cheaper alternative (by about 50% I reckon) means that hairdressers who want to attract male customers have to keep their prices lower for men. But not so low that their women customers will get really annoyed at the discrimination.

But hey: I'm not complaining - I don't want some inspectors going around demanding equal pricing for women and men. We know what that will mean: higher prices for men. This is one form of sexual discrimination I'm quite happy to put up with.
Posted by Gerard O'Neill at Wednesday, March 26, 2008