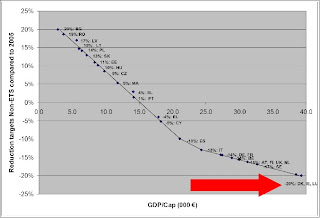 The European Council's Spring Summit last week in Brussels was a gift to the 'No' campaigners in the forthcoming referendum on the Lisbon Treaty. A key topic for discussion was the European Commission's directive on the next phase of climate change strategy known as 20/20/20 (see my previous post). We were treated to the spectacle of the Taoiseach being told in no uncertain terms that he (we) had no choice but to get on with meeting the target set out in the directive - and summarised in the chart.

The Irish Times quoted the European Commission’s president José Manuel Barroso, in reference to Ireland’s onerous 20% reduction target, as saying that "Our proposal is equitable, fair and technically sound - we will not change it.” He went on to say that "Ireland has benefited so much from structural aid from the EU because it was much lower than the average and now it is higher than the average." Moreover, if Ireland's leaders did not get on with delivering the target then they would be left with a "level of credibility close to zero".

To complicate matters further, it seems that Ireland's Greens want to set an even more onerous target of a 30% reduction in emissions relative to the 2005 benchmark: as reported in yesterday's Irish Examiner. Clearly we are heading into a turbulent political period as ratification of the EU climate targets proceeds with a view to completion early next year. There is an excellent summary of the issues available from the Institute of European Affairs.

It does seem we are again witnessing the democratic deficit at the heart of the European Union project, which ironically the Lisbon Treaty (née Constitution) is meant to address (at least partially). We are being presented with a 'consensus' on climate change strategy without our consent. Doesn't feel very democratic, does it?

Irish politicians (at least those who want to get re-elected) might want to think very carefully about how they proceed with the Brussels-mandated target for Ireland. A European-wide survey of public opinion about the environment published last week shows that the Irish are among the least willing to prioritise environmental protection over the competitiveness of the economy: second only to Bulgaria in our unwillingness among the EU 27 countries.

That won't, of course, stop the burgeoning number of unelected climate NGOs from making increasingly shrill demands of our elected politicians to Stop Climate Chaos. Here's how silly it gets, from just one email I received last week about CO2 emissions:

Right now each person in Ireland emits 17 tonnes a year. The Swedes emit 7.4 tonnes per person per year. The Chinese emit 3.9 tonnes, the Indians 1.6. As for the Malawians? They don’t even emit one tonne each a year.

What the authors forget to mention, in the midst of their eco-flagellation, was that Sweden has 10 nuclear reactors providing 50% of their electricity, China has 11 nuclear reactors (and up to another 10 coming on stream), whilst India has 17 nuclear reactors and 6 more coming on stream. Now in fairness to Stop Climate Chaos, Malawi doesn't have any nuclear power stations: but they do have one of the world's richest reserves of uranium and are projected to produce some 14,000 tonnes of the stuff from recently discovered deposits.

But I am being unkind: perhaps this is just a subtle effort by Stop Climate Chaos to soften us up for the nuclear option - doing the politicians job for them. Then again, perhaps not. Still, it wouldn't be the first time a climate policy embraced by the greener fringes suddenly got dumped.

All that said, the issue of climate change and our responsibilities to future generations need to be taken seriously. Part of taking them seriously, as set out in the OECD's recent Environmental Outlook to 2030, is to ensure that the prices of scarce and/or polluting resources are properly priced. A carbon tax can play a part, but the greater contribution will undoubtedly come from the forecast spike in oil and commodity prices.

I also think we need to get real about our priorities and obligations as a nation. As pointed out in an insightful new paper from the Cato Institute:

Climate change is not now—nor is it likely to be for the foreseeable future—the most important environmental problem facing the globe, unless present-day problems such as hunger, water-related diseases, lack of access to safe water and sanitation, and indoor air pollution are reduced drastically. Otherwise, with respect to human well-being, it will continue to be outranked by these other problems and, with respect to environmental well-being, by habitat loss and other threats to biodiversity.

But I believe we have a moral obligation as a wealthy nation to help those less fortunate, and I therefore concur with the conclusions in the Cato paper:

If one believes that developed countries have a moral and ethical obligation to deal with climate change, that obligation cannot, and should not, be met through aggressive emission reductions at this time - “cannot” because the planet is already committed to some climate change - and “should not” because the threats that climate change would exacerbate can be reduced more effectively, not to mention more economically, through focused efforts to reduce vulnerability or through broader efforts to advance economic development. Any such obligation is best discharged through efforts to reduce present-day vulnerabilities to climate-sensitive problems that are urgent and could be exacerbated by climate change.

I think we would have a great deal more consensus about that approach than about any 'targets' from Brussels: and maybe even some democratic consent as well.
Posted by Gerard O'Neill at Sunday, March 16, 2008