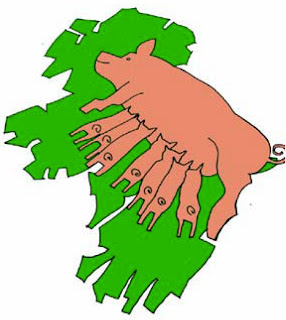 I grew up a 'townie' looking down on the 'culchies' from the surrounding countryside who went to my school (actually, looking up - since they all seemed as big as barns with hands like shovels: selection bias or what?)

There has always been an uneasy tension between town and country in Ireland, more so than in many other countries as we came late to urbanisation (come to think of it: the Vikings and the Normans forced it on us).

Nowadays that tension has been subsumed into a Dublin versus the (rest of the) Country dichotomy. But I think the tension has moved from harmless to pathological, as manifest in the Twilight Zone unreality that is 'de-centralisation' and regional planning in this state.

One of the most important reports I have ever read on the future of Ireland was published just a few weeks ago by The Futures Academy at DIT*. Called: Twice the Size - Imagineering the Future of Irish Gateways, the report paints the starkest possible picture for the future of our capital and our country if we persist with the lunatic notion of 'balanced development' and a political agenda that treats Dublin as an economic sow feeding the regional suckling pigs. And if you think I exaggerate just look at the recent analysis of taxes by county.

Our regional and spatial policies in Ireland have been a variation on Mao's Great Leap Forward. Only instead of steel furnaces in every backyard we get airports, motorways and industrial parks in every town with a population nudging 10,000. The result is Dublin: a capital city without proper city governance or adequate infrastructure, and a surging population that dwarfs all the demographic trends in the rest of the country.

Such pressures mean that Dublin has the dubious distinction of having a cost of living 22% higher than New York, and the forth highest of 71 cities surveyed at the start of 2008 by UBS. We were ranked 13th in 2005 by the way: boy have we got things out of kilter when we make Zurich, Paris, Tokyo and New York look cheap. A separate, quite extraordinary study on The Soul of the City by Gallup shows Dublin to be in the category of 'Good But Dis-Integrating' cities, along with London, Paris and Berlin. And it is obvious from the opinions of Dubliners reported in the study that we can see the dis-integration happening around us.

This also tells us that we need to see our capital city's future in a global context. In 2007, humanity's urban population surpassed its rural population for the first time in history. According to DB Research the future belongs to mega-cities, as well as to distinctive, smaller cities that create the right environment for business and cultural innovation. I've been reading a number of articles by Richard Florida, author of Who's Your City?, who has this to say about the future:

Globalization is not flattening the world; on the contrary, the world is spiky. Place is becoming more relevant to the global economy and our individual lives. The choice of where to live, therefore, is not an arbitrary one. It is arguably the most important decision we make, as important as choosing a spouse or a career. In fact, place exerts powerful influence over the jobs and careers we have access to, the people meet and our “mating markets” and our ability to lead happy and fulfilled lives.

The Dublin Chamber of Commerce has indeed anticipated some of Florida's insights, and has identified the importance of our capital as a catalyst for the knowledge-based economy that will provide growth for the future. They and others realise that the future of Ireland as a whole is inexorably tied up with the future of Dublin. But economic arguments are one thing: political arguments are another. And as the Twice the Size report makes clear, the over-taxed, traffic-suffering, over-charged voters of the Greater Dublin Area will soon elect the majority of TDs once the boundary commission catches up with demographic reality.

Maybe then it will be the turn of the East to awake.

* For the record, I'm a Fellow of the Futures Academy, but I was not involved in the Twice the Size report.
Posted by Gerard O'Neill at Thursday, March 20, 2008