History as a Mineable Resource 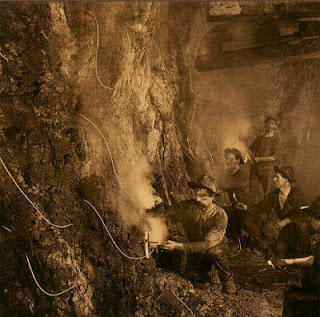 David McWilliams thinks we should do more to exploit the economic and business potential of the Irish diaspora, just as the Israelis have successfully exploited the Jewish diaspora. The first time I heard this idea from David I thought it both interesting and preposterous in equal measures. But I have to admit I'm leaning more towards 'interesting' as he continues to elaborate his ideas.

Ireland plainly doesn't have a strong military sector, nor should it (that's a judgement by the way, not an observation). But if the next generation of Irish IT entrepreneurs are to play to our strengths then what are they? I think the answer is fairly obvious: it's our ability to network. Look at Irish usage of mobile phones or games consoles or social networks like Bebo. On many measures we are actually ahead of most European countries (and certainly the United States when it comes to mobile usage).

I think a lot of our use of technology is due to our culture and disposition as a people (the greatest talkers since the Greeks and all that). The international success of the iconic Irish pub plays to this sense of the loquacious, communicative, garrulous Irish: and it even helps with our various diplomatic efforts on the world stage when we're seen as English speakers without the (US/British) baggage.

All of this is to say that Irish IT entrepreneurs focusing on the networked future will at least be able to draw on the patterns and passions of their home market. So what is the networked future? I recently came across one exciting vision of such a future - or the New Ecology of Things, as it is being called. Imagine a world where cheap, embedded processors linked together over cheap (even wireless) communications channels are as easily assembled as lego blocks: with the same potential to design infinite combinations and applications. That's where we're headed.

I have been a big fan of futurist and science fiction writer Bruce Sterling for many years. He is one of the smartest, heck - the smartest, thinkers on the planet when it comes to teasing out the implications of today's unevenly distributed future. Bruce is working at the Art Center College of Design in California with Sun Microsystems Labs to imagine and prototype the networked future. He envisions a world filled with 'heaps and heaps of knowledge and data that don’t wear out.' In his view, a world in which history is made into a 'mineable resource' that will require words and ideas that don’t yet exist. Better let him explain it.

As I get older I find there are two professions I admire more and more: sales people and designers. (Professional discretion requires that I draw a veil over those professions I admire less and less ;-). I am thinking of a designer like Marc Newson who has a special genius to see things differently to the rest of us and then to share that vision with us through his work.

It is in that rich, breathtaking interface between design, technology and the future that lies the greatest opportunity for the next generation of successful Irish IT businesses. What is a diaspora if not a potential network just waiting to be connected? Only connect.
Posted by Gerard O'Neill at Monday, March 10, 2008