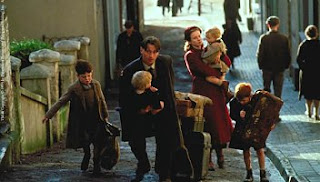 CORI (the Conference of Religious in Ireland) have just published their Annual Socio-Economic Review 2008. Coming from a 'the glass is half empty (and look at all the glass that is being wasted)' point of view, the report treats us to a long dirge on all that is wrong with Irish society - and how it's getting worse.

You get a sense of the tone by taking just one paragraph from the opening chapter on The Context:

Poor people are excluded from decision-making even when the decisions concern their level of income or their right to work. They are seen by many as a commodity, or are viewed as surplus to the requirements of society, and are dismissed accordingly. Society is now structured in such a way that people in these groups have no future prospects. Social and cultural life today requires money, and very often is organised around the place of employment. People who are poor and unemployed are excluded from the main life of the community.

Just think about what this paragraph says: 'poor people are excluded from decision-making even when the decisions concern their level of income' - I ask you: WHO gets to 'decide' their level of income, poor or otherwise? And I don't mean just gross income: when was the last time the Revenue Commission asked you how much tax you would like to pay? What about some of CORI's comments on social exclusion: 'they are seen by many as a commodity, or viewed as surplus to the requirements of society'. Really? Who views them this way? I'm reasonably well read but I don't recall anyone advocating 'eat the poor' or 'export the lot of them' in recent times (post Dean Swift anyway). What about 'Society is now structured in such a way that people in these groups have no future'? Again, I wonder which planet the good folk in CORI have been living on in recent years? As one community worker I heard put it: 'even the junkies are getting jobs these days' - so who are these poor unfortunate people CORI have told 'have no future'?

The tone, in other words, is straight out of The Worker's Party manifesto circa 1981: 'they' (the nasty capitalists) are out to get 'the rest of us' (the workless classes). Like I said, I really do wonder if CORI et al are living in some kind of time warp: not so much Angela's Ashes as Ashes to Ashes, unaware that it's actually 2008? Certainly their language and contrived sense of wounded grievance would make you wonder.

CORI is much exercised by comparisons of national social protection expenditures in the EU - and how badly Ireland compares. Once again we are beaten up by the authors for not being Scandinavian enough - even though a lot of Scandinavian's would really prefer our lighter, keep-more-of-the-money-you-earn-yourself approach to taxation and social policies. CORI's report cleverly splices together terms like 'infrastructural and social provision deficits' as if roads and sickness benefit are the same thing. They're not: one is capital expenditure (possibly funded by borrowing) that will support income generation in the future, the other is current spending funded out of taxes on those currently in employment.

A key issue of course is the definition of poverty. As I've noted before, the issues of equality and poverty get conflated in much of the commentary on Ireland's social problems - as it does in the CORI report. CORI do finally get around - on page 29 - to admitting that the incidence of poverty is actually falling, and has done since 2001. They, of course, attribute this to higher social welfare spending (on the elderly in particular) for which they claim some of the credit. Of course this has had an impact: but the more significant impact is from job creation. CORI make a big deal about the fact that 6.5% of those in work are living at risk of poverty. Or, if you prefer (though they don't): 93.5% of those in work are NOT living at risk of poverty.

CORI's solution to the - declining - problem of poverty in Ireland is 'fairer taxes'. Naturally the only fair tax is a higher tax on CORI-nation Street. But if CORI's ambitions stopped at higher taxes I would think fair enough: at least they are being consistent in demanding higher taxes to fund higher social expenditure (unlike some politicians who think you can lower taxes AND increase spending at the same time). But unfortunately CORI's ambitions don't stop there. Perhaps the most disturbing part of their report is that on Values - where I thought I might have had some common ground with them until I read this, referring to the Church's earliest teachers:

These early leaders also established that a person in extreme necessity has the right to take from the riches of others what s/he needs, since private property has a social quality deriving from the law of the communal purpose of earthly goods ... One of the major contributors to the generation of wealth is technology. The technology we have today is the product of the work of many people through many generations. Through the laws of patenting and exploration a very small group of people has claimed legal rights to a large portion of the world’s wealth. ... Therefore, no one can claim exclusive rights over the means of production. Rather that right “is subordinated to the right to common use, to the fact that goods are meant for everyone“.

... Since everyone has a right to a proportion of the goods of the country, society is faced with two responsibilities regarding economic resources: firstly each person should have sufficient to access the good life; and secondly, since the earth’s resources are finite, and since “more” is not necessarily “better”, it is time that society faced the question of putting a limit on the wealth that any person or corporation can accumulate.

... Most people in Irish society would subscribe to the values articulated here. However these values will only be operative in our society when appropriate structures and infrastructures are put in place.

This is scary stuff: pure, undiluted Marxism with a dash of Anarchism ('property is theft'). As for the Irish people subscribing to these values: again I think the CORI folk have been time-tripping back to the 1980s. The Irish people, last time I checked, subscribe to the view that they should keep most of the money they earn because IT'S THEIR MONEY, and I think you'll find they're rather attached to their possessions as well (houses, cars, DVD players - though the latter might not have been invented yet on CORI-nation Street).

The CORI report is a shame really - because extreme poverty in the midst of extreme wealth is obscene: and the only countries to have successfully reduced extreme poverty are those that have embraced the transformative power of lower taxes, strong property rights, and free trade. Not quite the formula CORI have in mind.
Posted by Gerard O'Neill at Tuesday, March 25, 2008