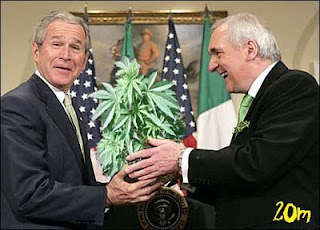 The annual St Patrick's Day outcry at the diaspora of Irish politicians left me feeling in a minority of one for thinking that our politicians don't take enough holidays. As far as I'm concerned they should take 365 days each year: heck, they're nearly there already, so just one more heave ...

I remember a delightful BBC biopic about the life of George Orwell. In one scene a friend comes to visit him at his home on the remote island of Jura in Scotland. They step outdoors to survey the landscape and Orwell's friend asks him, rather worried, whether it was true that there were no police on the island. "Yes" replied Orwell, looking around him at the fields, hills, sheep and sky "as you can see it's total anarchy", his tongue firmly in his cheek.

And so it is when some people fret about there not being any 'politicians on the island' - I look around me and wonder: what's the problem with that? The politicians and the media might need each other to fill the column inches and air time, but the rest of us just get on with our family lives, our friendships, our work and our dreams without them.

There has been a lot of media coverage recently on the placebo effect in relation to the effectiveness of various drugs and medical treatments. According to Wikipedia, a placebo is a preparation which is pharmacologically inert but which may have a therapeutic effect based solely on the power of suggestion. A placebo effect occurs when a patient's symptoms are altered in some way (i.e., alleviated or exacerbated) by an otherwise inert treatment, due to the individual expecting or believing that it will work.

Which got me thinking about Placebo Politics. Could it be that we think politicians are important to our wellbeing because, er, we keep being told they are? There has been some fascinating work done on the placebo effect in economics. One recent study showed that participants in an experiment were convinced that more expensive pills for pain relief were more effective than cheaper ones (both, of course, were placebos). So the more government costs the better we think it must be for our collective wellbeing?

Perhaps we need a controlled experiment: I wonder what would happen if our politicians really did take a year long holiday? Maybe they would just get on with their other jobs?

Oh, and a happy Lá Fhéile Pádraig to you by the way.