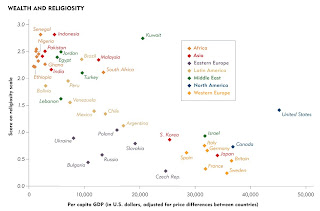 Ireland's transformation from a poor, religious society to a rich, secular society is more or less complete it seems. We're not the first to undergo such a change, of course, but I wouldn't be surprised if we were the fastest. Though Ireland is not on the chart, we're somewhere down towards the bottom right hand corner I reckon.

We are at a fascinating stage historically in the ancient debate between religion on the one hand and secularism (or science or doubt or reason) on the other. We have witnessed this directly in relation to Northern Ireland, and it forms part of the ongoing Western conflict with Islamism. New insights from philosophy and historical exegesis are helping re-define the terms of the discussion. But despite the gloomier headlines I think we are witnessing a new dawn of reconciliation between religion and secularism. This historical moment is explored eloquently in a recent article in The Atlantic (which the chart is from), which concludes:

We have seen how rapidly religion has spread in the past, claiming adherents from competing faiths before the competition knew what hit them. Both secularism and secularly inspired ways of being religious are spreading just as rapidly—maybe even more so. Historians may one day look back on the next few decades, not as yet another era when religious conflicts enveloped countries and blew apart established societies, but as the era when secularization took over the world.

This is not to herald 'the end of religion' or any such prophecy. Rather it is a recognition that perhaps we are finding a new vocabulary and shared perspectives to move the debate on - with both the religious and the secular perspectives contributing to a better future. Even as science turns its attention to explaining the religious impulse, we are discovering anew the role religion plays in social cohesion. Even economists now recognise that religious belief is a powerful mental insurance against economic turbulence.

And there's one other thing: visit any church or religious gathering and the one thing that will strike you is the gender balance (it certainly struck me this morning at one of my occasional visits to mass at Blackrock church). By and large, women seem to make up the majority of religious communities in secular societies. So it is women who hold the key to religion's future (in Ireland as well as elsewhere), and I suspect the benefits they derive will not be easily replicated by secular alternatives. Religion's future is therefore female.