The Sin of Judgement 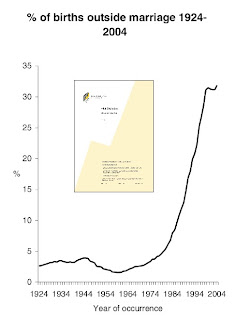 We no longer believe in sin in Ireland. We have entered a post-Christian, post-modernist era in which anything goes - more or less - so long as you don't inhibit anyone else's 'goings'. To be sure, there is much that I welcome about this.

But there is one sin left: and that is the sin of passing judgment on other people's lifestyles - no matter how appalling their behaviour or damaging the consequences of their choices. I recently watched a hilarious episode of My Name Is Earl in which the mother of one of the characters turns out to be a gambling addict. She does several things to fuel her addiction, selling the family car, selling the house - all without telling her husband and children. But every time she is found out she demands "don't judge me" of her accusers, playing the part of the helpless victim.

"Don't Judge Me" appears to be the mantra of a growing number of people in Ireland. Take births outside marriage: as the chart shows the proportion of births to unmarried mothers has risen from just over 5% of all births twenty years ago to nearly a third today (32% in Q2 2007 to be precise). In some parts of the country the figure is much higher - 54% of all births in Limerick City are to unmarried mothers (see Table 4, page 13 of this CSO report). And something tells me they're not all bohemian couples determined to shirk off the conventions of bourgeois society.

The consequences of this for the parents, the children and the communities affected have been disastrous. Study after study has shown that children raised in families with both biological parents present fare better on just about every measure of health, education and wellbeing than children born to single mothers. The tragedy is that we have to justify the blindingly obvious - again, the accusation is that we are passing judgment on other people's choices when we propose that married parents have made a 'superior' choice to single parents. Though in the wake of the abduction of Shannon Matthews in England, more than a few eyebrows have been raised by the conduct of her 32 year old mother who has had seven children by five fathers. Maybe it will become fashionable to pass judgment again?

None of us wants a return to the valley of the squinting windows. But all of us have to learn the fundamental lesson of economics: INCENTIVES MATTER. Slowly but surely some in Government are recognising this - as witness Seamus Brennan's initiative to change welfare provisions for single parents. New research from the United States shows that raising children from otherwise disadvantaged backgrounds in families with both biological parents will go on to attain higher levels of education and incomes compared to equally disadvantaged children raised by a single parent. These choices have massive implications for the next generation and beyond.

We should also to look further afield to avoid using the wrong incentives. Such as in Spain: where couples are getting divorced in order to get their children into better schools. While we're at it, let's avoid the initiative in Australia to encourage couples to have children which offered a bonus of $3,000 for every child born after July 1st. Guess what, there was a collapse in the number of births in May-June and a spike in July-August overwhelming maternity facilities. Gee - who would have seen that coming?

Like I said: incentives matter. Not just in the wider economy but also in our personal and family lives. Let's be wiser about the incentives we put in place, and not be afraid to judge the consequences.
Posted by Gerard O'Neill at Thursday, March 27, 2008