Dublin Will Save Us 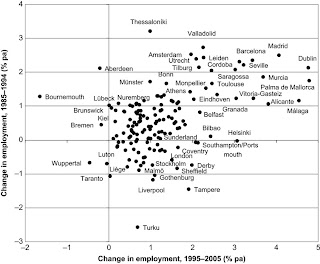 According to the CSO, Dublin accounts for 3 out of 10 jobs in the country, down only a little over the past decade. Indeed, a fifth of jobs created since 1997 were created in Dublin.

Dublin is the wealth and job-creating engine of the national economy. The pace of job creation in the capital over these past few decades has been phenomenal: amongst the highest of any European city as the chart shows (from a fascinating analysis of Europe's resurgent cities).

The important thing in the current uncertain economic climate will be to ensure that Dublin is allowed to continue playing its job-creating role. That cannot be taken for granted unfortunately. As I've noted before, our national spatial strategy does seem tailor-made to leave us with the worst of all worlds: a dysfunctional capital and mis-developed regions.

But the future is urban - for most of humanity, not just the Irish. Here's one glimpse of a technology-led urban future: precisely the kind of thing we need to imagine for Dublin. Let the East awake.
Posted by Gerard O'Neill at Tuesday, April 15, 2008