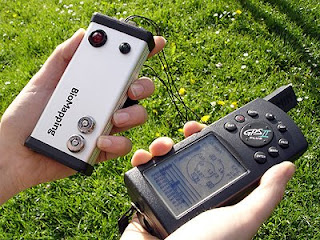 I have a thing about maps. It's probably a guy thing. I was in London yesterday navigating with my trusty A-Z guide, happy as a pig in proverbial.

I think that's one reason why I am so inspired by the work of Christian Nold, whom I've blogged about before. I think the guy is a genius. He is using technologies like GPS devices and lie detectors to 'emotionally map' villages, towns and cities. Here he is talking at MIT Media Lab about his work with Responsive Communities, referencing Greenwich in London as it happens, among other places. You can see the outputs here.

His shtick isn't technology per se: rather it's about the anthropology of the urban spaces we live in. And he brings an artist's and designer's eye to the work that he does. He's now working on doing a biopsy into the health of a particular community. Sounds like they need him in Limerick right now. Nold's work is a delightful example of the idea of 'history as a mineable resource' that I've previously described as the future for Ireland's innovation success.

Is anyone in Ireland doing this kind of stuff? If you are, I'd love to hear about it.

Postscript - some of my favourite map sites: Worldmapper and of course the Strange Maps blog.
Posted by Gerard O'Neill at Wednesday, April 09, 2008