Getting from Here to There 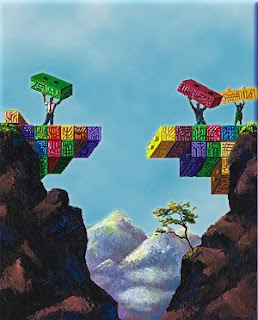 I was at a presentation by Jeremy Rifkin recently to the Institute of European Affairs in Dublin. The Institute is unique in Ireland in providing a forum for the discussion of ideas, trends and options independent of party politics or government influence. I'm proud to be a member and I would recommend membership to anyone interested in serious discussion about our future.

Rifkin's ideas about The Third Industrial Revolution are provocative and timely. With oil prices continuing to rise the penny has dropped with most folk that we have entered a very different energy era to the one heretofore. But as always with radical solutions such as those proposed by Rifkin there is the problem of how do we move from 'here' knowing where the destination is 'there'?

I've mentioned before the tyranny of the installed base, and I think this applies to the energy sector in particular. Rifkin's idea of distributed power generation using building design to create a surplus of power for local and shared consumption is very smart. Unfortunately, most of the building stock we're going to have for the next 20-40 years has already been built.

I expect therefore that the Third Industrial Revolution will be just like the first one - it didn't replace the previous order (agriculture) but rather subsumed it into an new economic system. Similarly, we will continue to have centralised generation capacity and grids (including those enhanced with renewables) alongside distributed power generation and consumption as Rifkin envisages it.

More evolution than revolution admittedly, but we should still get to the same destination. At least I hope we will.
Posted by Gerard O'Neill at Thursday, April 10, 2008