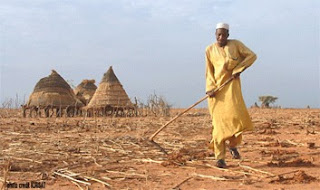 There has been something of 'watching a train crash in slow motion' about the unfolding food crisis. It is a bitter irony that several responses to the threats of global warming and energy insecurity have unleashed a far deadlier problem: global hunger. One multi-media summary in The Financial Times shows just how global and severe the food issue has already become. Several countries are already imposing export restrictions on trade in grain and rice to protect domestic supplies.

To make matters worse, key energy supplies (needed to farm and produce food) are coming under increasing pressure as evidence of an imminent peak in global oil output accumulates. The latest victim appears to be Russia - with oil output peaking last year. Again, none of this is news to those of us who have been following the peak oil issue over the past few years. There is one silver lining however: the more apocalyptic climate scenarios touted by some of the same people who led us down the deadly cul-de-sac of biofuels will not now come to pass because of peak oil.

So what next? There is enough oil and gas to produce enough food to feed the world. The critical thing will be to ensure that farmers, investors, energy producers and consumers all receive the right price signals in order to change their behaviour. That means no more subsidies to private transport (i.e.: toll-free roads); no more state monopolies of public transport (i.e.: anyone qualified to drive a bus should be qualified to provide a bus service); and no more tax-funded subsidies or grants to biofuel production (or any food production for that matter). Then the free choices of private actors in the economy will avert the disaster that now threatens so many around the world. One far more deadly than falling house prices or stock markets.
Posted by Gerard O'Neill at Tuesday, April 15, 2008