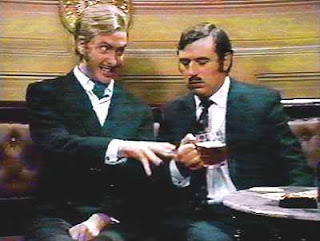 There's a hilarious Monty Python sketch about the power of insinuation, which draws the viewer into thinking they know what's going on, when in fact they don't. We are 'nudge, nudged' by the dialogue into understanding what Norman means, but it turns out to be something else entirely.

Back in the world of behavioural economics and public policy, there's a fascinating contribution to the burgeoning literature of 'applied microeconomics' called Nudge: precisely about using subtle signals to change people's behaviour. I've only started reading it, and I suspect it is one of those books that's going to get a lot of marketers and policy makers thinking about how they go about getting their messages across.

The authors, Richard Thaler and Cass Sunstein, argue a case for 'libertarian paternalism', in other words: by knowing how people think, it is possible to design choice environments that make it easier for people to choose what is best for themselves, their families, and their society. What the authors call "choice architecture", designed to nudge us in beneficial directions without restricting freedom of choice. Some of the insights from the book are fascinating. Here's Christopher Caldwell's summary from a review in the Financial Times:

People misjudge their best interest even in simple decisions where all the information is available. For instance, the candidate in a multi-candidate election whose name is listed first generally gains about 3.5 per cent more votes from the location of his name. People are irrationally loss-averse. They are twice as upset over the loss of something as they are elated over the attainment of it. People tend also to be present-oriented. They have a bias in favour of the status quo.

Now we know why Bertie did so well for so long! In effect, Nudge is about harnessing human frailty for human betterment. A laudable goal indeed. So the authors propose things like 'opt-out' rules for organ donations and pensions savings, rather than the present 'opt-in' stance of many arrangements. So using inertia to affect better outcomes whilst still allowing everyone the freedom not to participate (in other words, they consciously opt out, rather than consciously opting in). It is also about the power of contracted commitment: a great example being StickK.

We have had some experience of this in Ireland: the plastic bag tax, for example. The book contains lots of other examples of Nudge in practice - and the potential for Nudge in theory. The Nudge blog, by the way, is excellent and well worth a visit. Certainly, since I've started reading more of Thaler's and Sunstein's work I find myself seeing 'nudges' everywhere. Here's one I liked from the Philippines - encouraging smokers to quit by getting them to save money in a bank account, which they forfeit if they start smoking again ...

What I like about the Nudge concept - or libertarian paternalism if you wish - is that it rests on the same fundamental insight of economics, namely: INCENTIVES MATTER. Only instead of accidentally creating the wrong incentives, the plan instead is to use behavioural economics to identify the right incentives.

That certainly works for me. Know what I mean?
Posted by Gerard O'Neill at Saturday, April 05, 2008