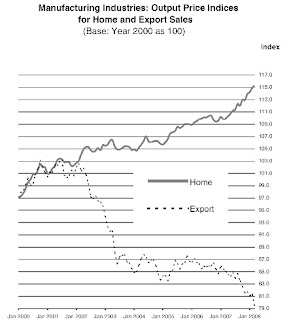 I've mentioned the Paddy Tax before, but now I've discovered the Paddy Price. The chart is from the CSO's latest Wholesale Price Index report for March 2008. It shows that the average price of goods manufactured in Ireland for domestic consumption has risen by over 15% since 2000, while the price of goods for export has fallen by over 20%. That's a 35% price gap ...

Sure, some of it has to do with the different composition of goods exported and those that aren't. The former are dominated by IT and pharmaceuticals: and prices have been falling worldwide. The latter are dominated by food and construction-related goods, and these prices have generally being going up (and not just in Ireland).

But I suspect it isn't all to do with composition. Rather I suspect that manufacturers are responding to the competitive pressure of the appreciating euro by cutting their prices to hold on to export customers and markets. I don't blame them. It does mean though that when the opportunity arises to 'cross-subsidise' their export prices with a bit of padding of their domestic prices then they will do so if they can get away with it. Again, I don't blame them.

On the one hand it is reassuring to see Irish-based manufacturers responding to the strong euro so aggressively and quickly: exports may well be the only positive part of the overall Irish economic picture this year. On the other hand, with consumer price inflation already over 5%, we don't really don't want to see the top line in the graph continuing upwards even if the bottom one has to keep falling.

Whilst on the subject of prices there was a reassuring piece in The Daily Telegraph recently explaining why a) it's a good thing that house prices are falling and b) why it's not that important as we're only talking about prices falling back to where they were a few years ago - not a few decades ago. I'm inclined to agree. And finally on prices - one of my favourite podcasts - from BBC 4's More or Less series - is now back on the air. The latest episode discusses why inflation feels higher even if objectively it isn't. Apparently it's all to do with the price of fun falling. Now surely that's a good thing?
Posted by Gerard O'Neill at Thursday, April 24, 2008