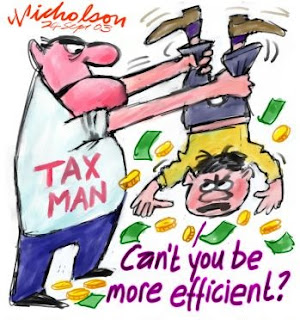 Bad and all as the headline inflation rate of 5% is, the trend in key components of the consumer price index is even more disturbing. Flour prices are up 42.0% on last year, bread up 19.6% and milk up 31%. Food prices overall are running at nearly twice the headline inflation rate. As I've noted before, we are only at the start of a food/energy supercycle that will bring lots more of the same soon.

One thing that should help is the strength of the euro - lousy for exporters, great for consumers. But it isn't, at least not yet. Part of the problem is Irish consumers' remarkable inertia towards and tolerance of bad value. It has rightly been dubbed 'the Paddy Tax', and we all pay it in one way or another.

More and more we are out of kilter with the rest of the world. For example, a recent study has shown that Dublin is the second most expensive location in the world for industrial space. Another reports Dublin as having the fourth highest cost of living in a survey of 71 cities. Yet a short trip across the border to Northern Ireland reveals a very different mind set when it comes to bargain hunting and value for money. And it's not just, er, the ones with Scottish ancestry.

However, I think the worm is turning here in the Republic of Ireland. Anecdotally it takes the form of conversations among my (mainly middle class) contemporaries about the cost of eating out and the steady erosion of their spending power at the supermarkets. But I think it will go further: the next turn of the worm will come when citizens start to query the value for money of all the public services and quangos they are paying for - with relatively little to show for it. Fine Gael are on to something with their report on Streamlining Government - though personally I think it could be streamlined a lot further. Even left-of-centre organisations like Tasc are increasingly conscious of the burden of public sector inefficiency on citizens and taxpayers.

Paddy the taxpayer may well be in for a further painful shakedown if our political masters are left to their own devices (preferring to raise taxes than cut spending). But at least a few politicians are starting to wake up to the potential vote winner that is advocating value for money for the taxpayer. Just in time really.
Posted by Gerard O'Neill at Friday, April 11, 2008