The Problem With The Ageing Problem 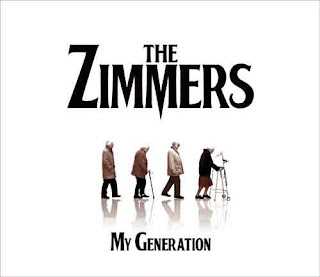 If you haven't seen The Zimmers (average age 70+) performing My Generation then do join the 4.3 million who already have. I've blogged before about the Frisky Fifties: this seems to push the boundaries for 'ageing disgracefully' out a decade or two.

I have been involved recently in a number of projects, workshops and studies dealing with the consequences of an ageing society. Inevitably, it seems, such discussions tend towards a (usually gloomy) assessment of the future of retirement and health spending. Which is a pity really. I think all of us (policy makers and business people) tend to 'problematize' old age far too quickly - and unnecessarily. First of all, the vast majority (96%-97%) of us will not end up in a retirement home or hospice. Even though that's the mental image many of us have about the 'end stage' of old age.

Of course, in the long run medical research responses to ageing may well push the current limits out considerably, as argued by scientists like Aubrey de Grey (whom I used to think was a bit of a quack - as many still do - until I heard a fascinating interview with him as part of the Point of Inquiry series earlier this year).

But long before that, common sense and a sense of opportunity will change the way some (though by no means all) businesses think about older consumers. One excellent blog on 50-Plus marketing is that by Dick Stroud over at 20plus30.com. There are many useful resources, presentations and studies for those interested in seeing beyond the stereotypes when it comes to the 'silver surfers' or whichever other label you want to apply.

Still, I think we need to go further. We need to see growing old - being old - as something natural, positive and welcome. But I don't think economists, marketers or politicians are going to lead the transformation, however well intentioned. Rather it will be the poets, artists and philosophers who will help us re-perceive being older for what it is. Here's one delightful example of just that, from the poet Yehuda Amichai, called A Man in His Life (posted on the Speaking of Faith website) and which coincidently refers to every securalist's favourite book in the Bible, Ecclesiastes:

A man doesn't have time in his life
to have time for everything.
He doesn't have seasons enough to have
a season for every purpose. Ecclesiastes
Was wrong about that.
A man needs to love and to hate at the same moment,
to laugh and cry with the same eyes,
with the same hands to throw stones and to gather them,
to make love in war and war in love.
And to hate and forgive and remember and forget,
to arrange and confuse, to eat and to digest
what history takes years and years to do.

A man doesn't have time.
When he loses he seeks, when he finds
he forgets, when he forgets he loves, when he loves
he begins to forget.

And his soul is seasoned, his soul
is very professional.
Only his body remains forever
an amateur. It tries and it misses,
gets muddled, doesn't learn a thing,
drunk and blind in its pleasures
and its pains.

He will die as figs die in autumn,
Shriveled and full of himself and sweet,
the leaves growing dry on the ground,
the bare branches pointing to the place
where there's time for everything.
Posted by Gerard O'Neill at Sunday, April 06, 2008