Smile You're On CCTV 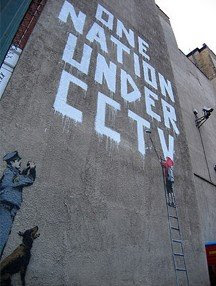 One of the things you most notice about London, returning after a few years, is the incredible number of security cameras. Apparently the UK has a fifth of all the security cameras in the world - one for every 14 citizens. It was recently pointed out that there are 28 cctv cameras within 200 yards of the home of George Orwell, he of 1984 fame.

To their credit, many British are refusing to take this Big Brother interference in their lives lying down. The photo is the latest mural by the anarcho-artist Banksy - created, ironically, under the cold gaze of a security camera. And for a hilarious series of montages sending up another dreary public services advertisement (from the Metropolitan Police) inviting Londoners to spy on their fellow citizens check this out.

Freedom is hard won, lightly worn and easily lost. We must be vigilant in Ireland too.
Posted by Gerard O'Neill at Monday, April 14, 2008