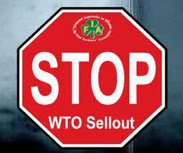 Fresh from its success in impoverishing tens of thousands of Brazilian farmers and farm labourers, not to mention leaving several million Irish consumers worse off, the Irish Farmers' Association now wants to stop food prices falling. They don't put it that way of course. No, instead we're treated to warnings that the current EU position at the WTO talks will open the floodgates to to beef imports, and bring rural Ireland to its knees.

Naturally our politicians have climbed well up the fence on this one - who cares about a few million Irish consumers when you have a few thousand angry Irish farmers to contend with? Nor do we hear a lot about socialist solidarity with third world farm labourers from the Labour Party; and the Greens haven't had a lot to say about supporting fair trade meat imports. And needless to say our development agencies are keeping mum about it too - better to hand out aid than give people a hand up, eh? What do these people think farmers in developing countries should do instead? Perhaps they think they should grow hedge funds or something?

Of course the biggest domestic loser is the Irish consumer/citizen/voter. Just how much they're losing has been helpfully calculated by Con Lucey, Chief Economist at the IFA. Go to page four of his presentation and you'll see a slide showing the impact on beef prices of the current WTO proposals that have so vexed the IFA and its allies. According to the IFA's own calculations, the WTO deal will reduce the price of sirloin steak paid by the Irish consumer by €2.58 a kilo. Shocking: we can't have falling prices for food now can we? Tut, tut.

What is truly shocking is the brass neck, self-serving, shameless ambition of the farmers lobby to foist higher food prices on consumers. And yet our politicians, like spineless sheep, dare not disagree with them. Just imagine if the book sellers of Ireland got together and lobbied the Government to stop the importation of books purchased on Amazon.com because it was reducing the price paid by readers? (The French, God help us, have done just that). Here in Ireland we would nevertheless be outraged - and yet the farmers propose the same thing in relation to something far more fundamental, namely the food we eat, and nobody dares say boo.

By the way, the WTO deal only proposes a 70% cut in import tariffs on beef - not their complete removal. We can't have those developing countries selling even cheaper food to Europeans now can we? Next time you're sticker shocked by the price of groceries, just be sure to thank the IFA and the Government for your predicament.
Posted by Gerard O'Neill at Saturday, April 19, 2008