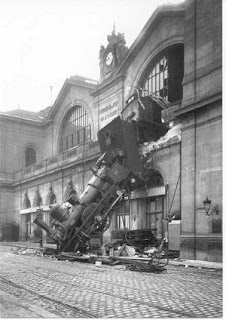 My very first job after graduating was working in a research centre run by Malcolm Wicks, now the UK's minister for energy. He's a good man who now finds himself with one of the most difficult political briefs. I was watching him on BBC2's Newsnight last night defending a recent announcement by Gordon Brown that the UK will be expanding its nuclear industry. As I listened to him he confirmed every concern I have about our energy future in Ireland, not just the UK.

Watching developments in Britain is like watching a train wreck in slow motion - horrible and fascinating at the same time. UK oil production in the North Sea peaked in 1999 and is now down 60% in terms of output. The problem is that everyone knows this but not enough has been done about it in the meantime. Large parts of England experienced a power cut on Tuesday as two power stations (one nuclear, one coal) went off grid at short notice. As one commentator on the Newsnight programme put it: the UK is a severe winter away from massive, regular power cuts as its ageing stock of nuclear and coal fired power stations struggle to keep up with demand.

Unfortunately we are not in the position in Ireland that we can simply observe developments in the UK with friendly concern but without worries about its impact on us. In fact, as the latest ESRI medium term review notes, we will be increasingly dependent on UK electricity through not one but up to three interconnectors that will be built over the next fifteen years or so. Ultimately the ESRI expects we will need to import 1,500 megawatt of electricity from the UK to fill the gap in our own generation capacity. And there's the problem: the UK isn't going to have 1,500 (or 1,000 or 500) mb of surplus capacity to sell us if things keep going the way they're going.

But right now, our energy 'strategy' has essentially outsourced a large part of our future electricity supply to the British. I've no doubt they are decent people who will help us out if they can: but if British households and businesses are left shivering in the dark due to shortfalls in their own capacity then I can't help feeling that we're going to be way down their list of priorities when things get really tight.

Maybe an interconnector with a nice, reliable French nuclear power station mightn't be such a bad idea by way of a fall back plan?
Posted by Gerard O'Neill at Thursday, May 29, 2008