The Heart of Lightness 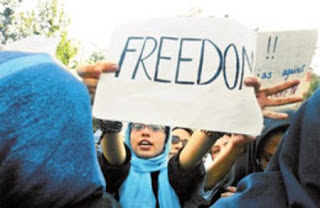 I am a long-time reader of the Lew Rockwell website - I love their slogan: anti-state, anti-war, pro-market. A sound enough recipe for freedom, peace and prosperity it seems to me. Lew has written a wonderful essay on the mystery of why so many people take the benefits of capitalism for granted and instead carp about perceived 'failings' - like income inequality.

He describes a scenario I'm familiar with myself - eating a meal, say, at a conference where some of the people at the table are giving out about the failings of capitalism oblivious the fact that the meal they are enjoying is only possible because of capitalism. As Lew puts it:

You are surrounded by the blessings of capitalism. The buffet table, which you and your lunch partners only had to walk into a building to find, has a greater variety of food at a cheaper price than that which was available to any living person — king, lord, duke, plutocrat, or pope — in almost all of the history of the world. Not even fifty years ago would this have been imaginable.

All of history has been defined by the struggle for food. And yet that struggle has been abolished, not just for the rich but for everyone living in developed economies. The ancients, peering into this scene, might have assumed it to be Elysium. Medieval man conjured up such scenes only in visions of Utopia. Even in the late 19th century, the most gilded palace of the richest industrialist required a vast staff and immense trouble to come anywhere near approximating it.

We owe this scene to capitalism.

And yet ... the folks at the table may argue they're not advocating communism - just a kinder, gentler, fairer sort of capitalism. One that still puts food on the table but somehow manages to solve all the world's other problems at the same time (poverty, starvation, climate change, inequality etc.) Which somehow are seen as a consequence of capitalism (exploiting third world countries and so on) despite the fact that a third world standard of living was the lot of all of humankind before the extraordinary emergence of free markets in the 19th and 20th centuries.

Janet Daley put it well recently when she observed (in light of the demands for intervention in response to the recent financial turmoil) that:

The market itself is not malign or immoral or any of the anthropomorphic things that its enemies claim: it just is. It is what people want and what they do: it is a mirror of the best - the most creative, the most dynamic, the most resourceful - in human nature, and the worst - the most ruthless, the most selfish, the most crass.

That is why, unlike a true system such as communism, it will survive and recover from even the most seemingly disastrous crises. Because, like the human spirit, it is indomitable, and because it creates, willy-nilly, the greatest possible opportunity for individual potential to flourish, which is why the spread of free markets has brought about mass prosperity on a scale unprecedented in human history.

But I have to be realistic: anti-capitalist sentiment will always be with us. One reason is that politicians and academics live in a zero sum world (you win the election or you don't; you get tenure or the other guy gets it) - whereas those of us engaged in the marketplace live in a positive sum world (there is no limit to human creativity nor human imagination). That's what fuels the media's fascination with politics and disdain for business. Politics is a knockout contest like sport - and all the more entertaining a spectacle for that very reason.

But ultimately the market is more aligned with our human essence than politics or academia. That gives me hope for the future - and for where my next meal is going to come from.
Posted by Gerard O'Neill at Sunday, May 25, 2008