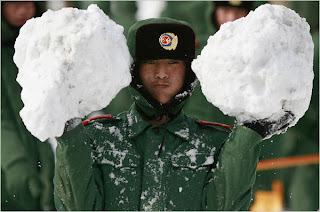 The recent spell of global warming peaked in 1998 - a full decade ago - with each year subsequently recording cooler temperatures (and in the case of the recent winter in the Northern Hemisphere, extremely cold). There is an interesting debate taking place (even though we're told 'the debate is over') which suggests, according to Don Easterbrook, that we may have entered a thirty year cycle of cooling (with the next cycle of warming due some time after 2020).

The BBC's More or Less programme has got in on it with a wager between two climate watchers about whether we'll see a year warmer than 1998 by 2011. If we do then it will be pretty clear that we are still in a warming phase (with all the implications for human involvement in global warming and responsibility for doing something about it). If we don't then it suggests that the global cooling proponents may have got it right (this time).

Of course there are those who don't think we have the luxury of waiting until 2011 to see which side is 'right' - James Hansen and Bill McKibben among them. Personally I think they sound like the lyrics of David Bowie's Five Years - inciting panic when panic is unwarranted. If anything it looks like we are tracking the least threatening of the IPCC's illustrative marker scenarios (see table SPM.3 on page 13). Some prudent preparations for a less benign scenario are called for in my opinion - not least because the main beneficial side effect I foresee is that we will solve the energy and food crisis before we face a real environmental crisis.

But if I was going to a 'Five Years' moment it would be about the prospect of us flipping into another ice age (the next one is 1,000 years overdue). A colder climate is far, far deadlier than a warmer climate - the former means starvation, the latter means longer growth seasons. Time, as always, will tell.
Posted by Gerard O'Neill at Monday, May 12, 2008