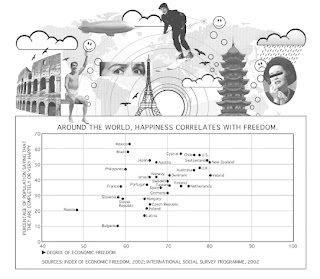 Every so often I read a reasoned critique of economist's obsession with measure such as GDP and GNP and I end up agreeing that we need something better. Which is why I am so interested in concepts like that of Gross National Happiness - it kind of cuts to the chase and puts the desired end state in the definition; rather than talking only about means. You can't eat GNP.

Arthur C. Brooks has written a fascinating book of the same name and he reaches some reassuring conclusions. Firstly, happiness and freedom are strongly connected - as illustrated in the chart (with Ireland positioned well up the rankings). He mainly writes from an American perspective (as often is the case), but we know from economists like Bruno Frey that countries like Switzerland, with their strong focus on local decision making, show a strong correlation between happiness and democracy.

Which is kind of reassuring really. As Gideon Rachman points out in a delightful commentary in the FT on Europe's place in the world:

Arguably, the EU has achieved a sort of nirvana. It is too strong to be attacked; and too weak to be asked to sort out the rest of the world’s problems. As Harry Lime might have pointed out, Europe has become a giant Switzerland.

Maybe the 'Yes' campaigners in the Lisbon Treaty Referendum need to start emphasizing Gross National Happiness over claptrap about 'being at the heart of Europe'?
Posted by Gerard O'Neill at Tuesday, May 20, 2008