It's the Economy Again, Stupid 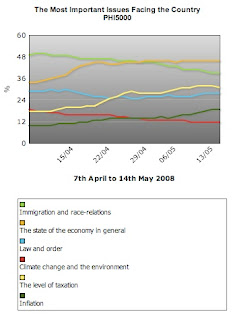 I remember the early 1990s when 'green marketing' was the buzz word and we were all told to imagine a world in which new styles of eco-living would come to pass. Then the price of oil headed to less than $10 a barrel and we swapped our hair shirts for SUVs.

I'm getting a sense of 'deja-vu all over again' about the current changes in consumer attitudes towards the environment. I'm a big fan of the research company YouGov, who have partnered with PoliticsHome to provide a fascinating daily stream of UK consumer sentiment called Phi5000. The chart is from their latest report and it shows a steady decline over the past few months in the percentage of citizens saying climate change and the environment is the most important issue facing the UK. The state of the economy (and inflation) are the fastest growing concerns.

I think the same is happening in Ireland - at least from the surveys, focus groups and one-to-one conversations I've seen or had from around the country. A recent European Commission survey showed that the Irish have the second lowest level of agreement of the EU27 countries with the statement that 'environmental protection must be given priority over the competitiveness of the economy' (51% agreed) - see table on page 112. Only Bulgaria agreed less.

I suspect that Brian Cowen is more of an 'old green' than 'new green' type - and will put the economic welfare of the Irish people ahead of self-inflicted eco-targets that nobody else (outside of Europe) is bothering with. At the end of the day, $135 oil (heading to $200) will do more to reduce people's carbon footprint than any amount of exhortations. Indeed OPEC may well end up doing more for the environment and climate change than the multi-billion euro funded NGOs intent on brow beating us into behaving ourselves. It has already.
Posted by Gerard O'Neill at Tuesday, May 27, 2008