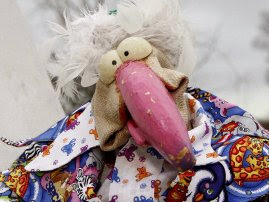 I had a vision of Ireland's future on Tuesday evening. We last won the Eurovision Song Contest back in 1996 with, as I'm sure you remember, Eimear Quinn singing The Voice. That was twelve years ago. Back then we were the bright new things on the world's stage - too old to be seen as an overnight success, too young to realise it wouldn't last forever.

And it didn't. Now we're practically old money in a European context: GDP per capita in Ireland is more than four times that of Bulgaria. The Eurovision Song Contest belongs to the 'new arrivals' - who anyway tend to vote for one another on a bloc basis. Indeed it seems the former Soviet Union countries tend to vote for one another - but then again, so do the former British Empire countries (i.e.: ourselves and the UK).

This means in effect that Ireland will never win the Eurovision Song Contest again. Though judging by the not-quite-a-national-day-of-mourning that greeted Dustin's demise, I would guess we'll learn to live with that scenario.

But it says something else I think. We're no longer infatuated with Europe, and Europe is no longer infatuated with us. If anything we're in danger of being seen as 'rich and selfish', as I heard a concerned John Fitzgerald from the ESRI put it recently. He's probably right - at least as regards those in Europe who give us a second thought. But most obviously don't: nor we them.

I think we'll vote Yes in the referendum next month: more out of a sense of duty than out of any real passion or ambition. Still, we're a much better country now than we were back in 1996. As Brecht once put it: pity the land that needs heroes. I might add: pity the land that needs success at the Eurovision Song Contest. It is a measure of our success that we need neither heroes nor trophies to feel good about ourselves.