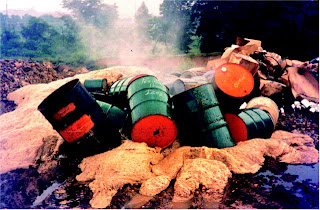 The revelations in last night's Prime Time programme on RTE were shocking. We saw several banking officials advise an 82 year old woman to lock her savings up in 5-10 year bonds which would incur a penalty if she should happen to try and access the money sooner for nursing home expenses, for example. Something highly likely at her age.

But the issue wasn't just one of mis-selling financial products to an elderly saver. The wider issue was one of a banking and financial system struggling to get hold of resources, in the form of savings, simply to stay afloat as liquidity dries up. The fallout from the wrenching financial crisis that recently swept across the Atlantic from the United States is now being felt. Quite simply, Irish banks don't have the money to lend to their customers - even customers who were deemed credit worthy up to a few months ago.

How has this come to pass? Essentially, banks in Ireland as elsewhere participated in a merry-go-round of financial 'innovation' over the past 6-7 years that made loan sharks look like conservative pillars of the community. One such innovation was the NINA loan: in other words, a loan to home buyers which required no evidence of the borrower's ability to afford it, let alone meet repayments - literally 'no income, no assets'. Hundreds of thousands of these loans in the United States got bundled up into Collateralised Debt Obligations (CDOs) by Wall Street investment bankers which then magically gave them AAA credit worthiness. Naturally our own banks in Ireland (as everywhere else) bought these and similar innovations. For an outstanding description of how this came to pass, told through the experience of real people at every stage in the process, please do listen to this amazing broadcast by Chicago Public Radio.

Those in the know in the financial community have come to call these now worthless CDOs 'toxic waste'. But the toxin is now spreading throughout the body of the global financial sector - and nobody knows just how bad it's going to be. Meanwhile the banks, lemming-like as ever, are now asking for all their umbrellas back just as the rain starts.

The inevitable consequence of the toxic waste is that the banks are scared: they don't know yet how bad their exposure is, and they will do everything to protect their balance sheets and credit worthiness: including getting their hands on savings by every means possible ... and, for the most part, legal. But as the pressure from head office spreads down to branch level, don't be surprised if we hear more stories of elderly people (and others) being mis-advised to lock away their savings for 5 years and more. And don't be surprised if the pace of our economic recovery is held back by hair shirt bankers atoning for their credit-binging excesses of yester-year.