Will Carbon Footprints get the Boot? 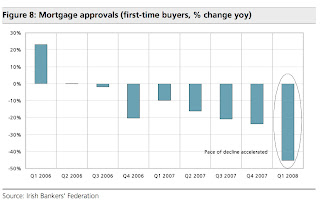 I was one of a panel of speakers at a conference on Carbon Footprinting organised by IBEC today. The thought struck me as I listened to a number of presentations on the measurement of carbon footprints (and what to do about them) that this may all become very academic in the very near future.

We are feeling the pain of a whiplash economy, with nearly every business person I've spoken to remarking on the sudden (negative) change in their individual markets at the end of March going into April. And usually in the same breath they remark this came after a stronger than expected start to the year through January and February. As one business man - who deals with a lot of foreign nationals - put it to me: 'the Poles all went home at Easter and didn't come back'.

Just how severe the deceleration in the Irish economy has been in the past few months is shown in today's economic commentary from Davy. They make George Lee look like a raging optimist with this latest missive. The chart from the report show the rate of change in the number of first-time mortgages approved in the first quarter of 2008: the number was down fifty percent on the same period last year.

Davy are penciling in growth rates for this year and next that are the lowest since the 1980s. And, needless to say, most (make that all) of the risks are on the downside. The scariest of which (though Davy don't say it) is a rise later this year in ECB interest rates to curb an oil-fueled inflationary spike. One of those scenarios you really only want to look at through your fingers from behind the couch. Make it the 1970s in that case ...

Hence my thoughts about carbon footprints and all of that. Consumers, both south and north of the border, are looking at huge increases in their energy costs over the rest of this year. Neither they, nor the companies trying to hold on to their diminishing spending power, will be worried about Kyoto targets, ETS schemes or CO2 emissions. Job security, the cost of living and mortgage rates will have their undivided attention.

Of course the issue of climate change will not wait for an economic recovery. I'm a climate agnostic rather than a climate skeptic, and I do think that we should respond to the risk of climate change e.g.: by introducing a moderate but rising carbon tax if oil prices start trending downwards. More importantly, I believe we should help those outside of Ireland most affected by climate change in the short term but least able to help themselves (e.g.: through Irish Aid).

Carbon footprints will get the boot in 2008-09, and it may be some time again before they are back on the agenda with consumers, businesses - or voters.
Posted by Gerard O'Neill at Wednesday, May 28, 2008