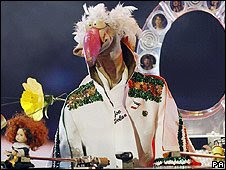 If only. If only Dustin had won the Eurovision song contest; if only Ireland had qualified for Euro 2008; if only Tyrone had beat Down last weekend. Okay, maybe not that last one. Still, it could have been so different: we would have gone into the Lisbon referendum buoyed up by a 'feel good' factor - instead we got a 'feel bad' factor which more or less guaranteed a win for the No campaign(s). In the end there were numerous reasons to vote No (some of them imaginary, others understandable); and an absence of one, compelling reason to vote Yes (assuming you weren't motivated by ridiculous appeals to guilt and gratitude).

The No campaigners are entitled to celebrate their victory: and all of us (even those of us who voted Yes) should all appreciate the extraordinary demonstration of democracy we have been through - I am glad to live in such a free country. Nevertheless, the 'feel bad' factor is going to give way to a 'feel worse' factor over the coming weeks and months. Our economic difficulties here in Ireland are going to compounded by an even greater degree of uncertainty about Europe's future. I don't mean this in a spirit of 'apres nous le deluge': avoiding uncertainty might have been a partial reason to vote Yes, but it was hardly a sufficient reason. As someone once said, a principle is only a principle if it costs to abide by that principle. But I fear we're going to pay a price for our principles.

Europe will, of course, keep going - just as it did after France and Holland rejected the European Constitution. The European Union will remain a peaceful, prosperous and free association of democratic states - with the eurozone continuing to be the primary economic engine. Brian Cowen will have a job to do explaining what has happened to his opposite numbers in Europe. A recent Irish Examiner piece by Steven King gives some excellent advice, and suggests Cowen tells them that:

We need a period of reflection. Concocting a text that was deliberately incomprehensible with the explicit purpose of befuddling citizens was the wrong approach. It was too high-handed by half. Instead, we must rekindle our idealism, draft a coherent text the man and woman in the street can understand, and politely ask them to rally round. Scaremongering, putting a gun to their heads doesn’t work. I know.

CYNICISM only breeds cynicism. The majority of Irish voters did not believe there would be “dire consequences” arising from a no vote; nor did my senior ministers. Were the Danes isolated? Were the Swedes when they decided not to join the euro? On the contrary, Irish voters noticed that no votes in the recent past have delivered fundamental renegotiation.

So, there are questions, but there is not chaos. The damage done is not fatal. To listen to some colleagues’ rhetoric you would imagine another iron curtain had been drawn across our continent. Besides, enlargement has not gummed up our processes as some predicted. We need to listen more, not just go through the motions. We need a people’s Europe, not pretend it’s Europe v The People.