The Forward March of Europe Halted? 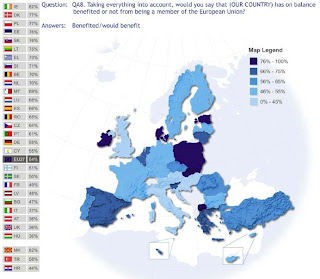 The survey was done in April. Less than six weeks later the majority of voters said No to the Lisbon Treaty. Go figure. Actually the 'figures' might be in other parts of the same Eurobarometer survey. It shows, for instance, a bare majority (54%) of Irish people saying they 'tend to trust' the European Commission. The EU27 average was 47% by the way.

But I suspect a more powerful explanation lies elsewhere in the study, specifically in the section on attitudes to globalisation. This is the depressing bit for those of us who see globalisation as the best guarantee we have of a decent future for all humankind. For it is quite clear from the survey findings that the Irish are turning their backs on globalisation at a time when more than ever we need to re-engage with longer-term, global growth dynamics (i.e.: China and India, not apartment blocks in the countryside).

A slim majority (56%) of Irish people in the survey agree that 'globalisation is good for economic growth'. But even more (58%) agree with the statement that 'globalisation is profitable only for large companies, not for citizens'. More depressingly, when asked to choose 'which of the following two propositions is the one closest to your opinion with regard to globalisation?' namely:

significantly more Irish people opt for proposition 2 (40%) than for proposition 1 (34%). A complete reversal of the responses to the same question in October 2006. Contrast the Irish response to the 78% of Danes opting for proposition 1 in the latest survey. Clearly RTE et al have done a good job scaring the natives.

Perhaps the real subtext of the No campaign wasn't "if in doubt, vote no" but rather "if afraid, vote no". Unfortunately the 'fear factor' is going to get worse rather than better for the foreseeable future. But this isn't just Ireland's problem: 43% of all EU27 citizens chose proposition 2 while only 39% chose proposition 1. Maybe we should let the Danes run the Yes campaign if there's another referendum?
Posted by Gerard O'Neill at Wednesday, June 25, 2008