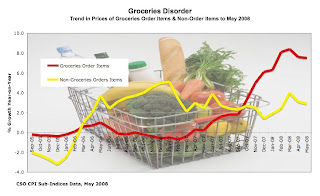 With inflation heading the wrong way, there are some who will harbour fond memories for the days of prices controls. For nearly twenty years we had the Groceries Order, introduced in 1987 and finally abolished in March 2006. The Order essentially created a pricing floor beneath which the prices of certain goods could not fall. The expectation was that - once the Order was lifted - then these prices would fall due to competitive and other pressures.

Unfortunately for Irish consumers this has not come to pass. I have prepared a chart using data from the recent CSO CPI report: Table 17 to be precise. The CSO have helpfully set out a table showing the trend in prices for those goods that were subject to the Groceries Order and those that weren't. Sure enough, after the Groceries Order was abolished there was a period in which the prices of those goods covered by the Order fell or remained static (the red line in the graph), while those of the other goods rose sharply (the yellow line). But fast forward more than two years since the abolition and we find something completely different: the prices of goods previously covered by the Groceries Order are now rising at more than twice the rate of inflation among goods not previously covered. Go figure.

With the National Consumer Agency pointing out the large differences between supermarket prices north and south of the border (a subject I've blogged about recently myself) then we can expect a lot more attention being paid to groceries in the months and years ahead. Of course we still have price controls (or floors) in the form of the Common Agricultural Policy. And I don't see the farmers relinquishing that any time soon - even if all the rest of us continue to pay the price.
Posted by Gerard O'Neill at Friday, June 20, 2008