Hope for the Bottom Billion 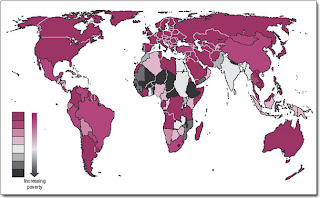 Martin Wolf is currently hosting a fascinating debate on world poverty. He has invited contributions from thinkers such as Jeffery Sachs, Richard Easterly, and Paul Collier on the most important issue facing humanity: the outlook for a solution to world poverty. All other issues - climate change, energy, economic growth - depend on how successfully we address, or don't address, this singular problem.

I am inclined to agree with Easterly's observation about Sachs' call for action by the UN that:

Fortunately for the world’s poor and for all the rest of us, there are much more dynamic forces in the world than UN bureaucrats and their academic advocates. Private, political, and social entrepreneurs, creative scientists, technological innovators, and resourceful workers and farmers found a way to escape “poverty traps” - the world poverty rate has declined by half over the last 30 years - and to avoid the famines and growth crash predicted by Ehrlich and the Club of Rome in the 1960s and 1970s. It is never a sure thing to predict that future problems will be solved in a similar way, but this historical record gives one a lot more hope about these challenges than one can derive from yet more toothless international agreements.

As I've noted before, free trade not fair trade is the key to the eradication of poverty among the billion or so fellow human beings living on $1 or less per day. But creating the conditions for free trade requires political will. I also like Bill Gates' thinking about creative capitalism - harnessing the power of market forces to deliver the innovations (social and technological) that will best solve the immediate health and survival needs of the world's poorest:

The genius of capitalism lies in its ability to make self-interest serve the wider interest. The potential of a big financial return for innovation unleashes a broad set of talented people in pursuit of many different discoveries. This system driven by self-interest is responsible for the great innovations that have improved the lives of billions.

Put crudely, the poor have needs but no spending power. Increase their spending power and the market will deliver the goods: in the absence of the usual distortions of corruption etc that kill the incentive to run a business in too many parts of the world. But Gates is a self-described 'impatient optimist' and he gives some great examples of harnessing the regulatory power of government for good. For example, the US government has recently decreed that any drug company that comes up with an innovation related to major third world health problem such as malaria will have another of their drug innovations (for the affluent world) fast tracked through the approval process (subject to obvious constraints: like that it does what it claims to do).